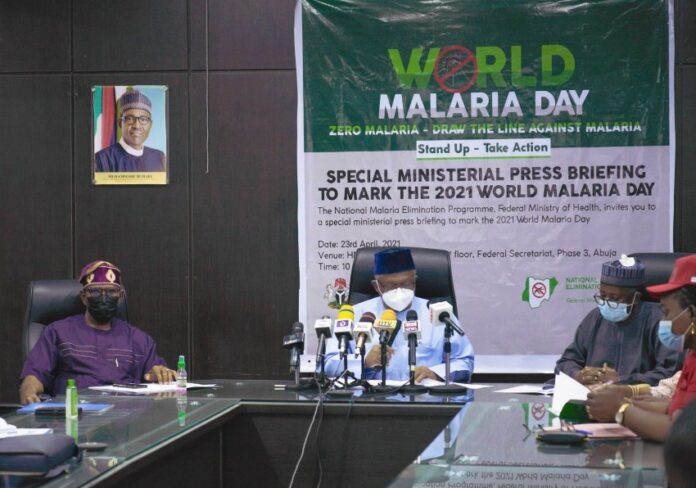 The WHO’s Representative in Nigeria, Dr. Walter Kuzadi Mulombo has congratulated the country on the progress made so far in the control of malaria.

Speaking at a press briefing hosted by Dr. Osagie Ehanire, the Minister of Health in Abuja to commemorate this year’s World Malaria Day, Dr. Walter revealed that there was a drop in malaria prevalence from 42% in 2010 to 23% in 2018.

TheFact Nigeria gathered that the decline notwithstanding, the burden of the disease remains high in the country.

According to the WHO, in 2020, there were 384,000 malaria related deaths in Africa, all of which it said were preventable.

It also said 60% of all hospital visits in Nigeria is due to malaria and that malaria-related absenteeism and productivity losses cost Nigeria an estimated US$ 1.1 billion every year.

Dr Ehanire, noted that though malaria is an ancient disease which has affected Africans for long, it continues to be of major public health concern, exerting its toll mainly on thousands of children and pregnant women.

The theme of this year’s malaria day is “Zero Malaria”. It aims to bring global attention to the efforts being made to bring to an end the scourge of malaria. Malaria is a life-threatening disease caused by parasites that are transmitted to people through the bites of infected female -Anopheles mosquitoes.

It is prevented by-Keeping your surroundings clean-Getting rid of stagnant water which can serve as breeding ground for mosquitoes. -Sleeping in a mosquito net.-Spraying insecticide or repellent on clothing.

-Spraying pyrethrin or a similar insecticide in your bedroom before going to bed. -Applying insect repellent to exposed skin. The recommended repellent contains 20-35% percent N,N-Diethyl-meta-toluamide (DEET). -Wearing long-sleeved clothing and long pants when outdoors at night.

Symptoms of malaria include: -A sensation of cold with shivering.-Fever, headaches, and vomiting.
-seizures sometimes occur in younger people with the disease sweats, followed by a return to normal temperature, with tiredness.

It is advisable to visit the hospital for proper diagnosis when you feel these symptoms.