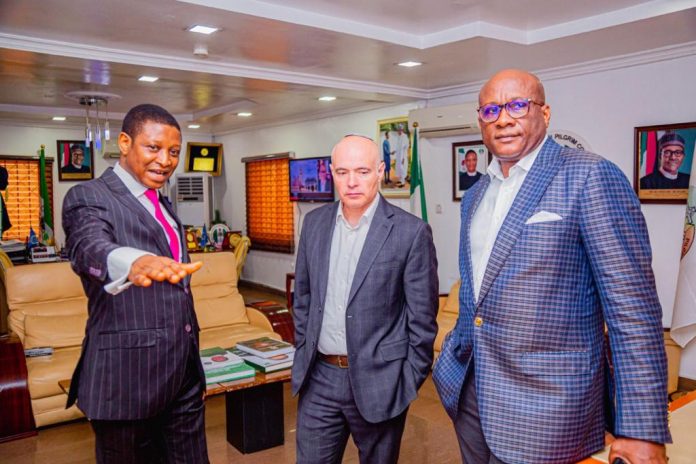 Rev. Pam disclosed this in a statement by the Commission’s, Head of Media and Public Relations, Celestine Toruka on Saturday.

The NCPC boss while playing host to the Israeli Ambassador to Nigeria, Mr Michael Freeman and the Chief Executive Officer of Air Peace Airline, Chief Allen Onyema in his office in Abuja said, “having a direct flight to Israel by a Nigerian Airline will curtail the issue of high expenditure and reduce abscondment”.

He further explained that direct flight to Israel will reduce the cost of flight drastically. In his words, “our joy is that our own person, a Nigerian will be the first to have this opportunity to airlift pilgrims directly to Israel”.

Rev. Pam hinted that by the end of November, next month, the inaugural direct flight from Nigeria to Israel would be launched.

He thanked the Ambassador for considering it imperative to pay a courtesy visit to NCPC for the first time, just barely nine months in office.

According to him, “we are very humble to receive you here in your capacity as one who represents the entire country of Israel in Nigeria”.

He affirmed that NCPC was set up primarily to coordinate and supervise the movement of christians to Israel and other Holy Sites around the world.

He commended the Ambassador for his zeal and doggedness in charting a way forward for Christian Pilgrimage. He further lauded the Envoy for his network of relationship both in Nigeria and Israel.

Speaking, the Israeli Ambassador thanked the NCPC boss for deploying all his energies in advancing the cause of Christian Pilgrimage in Nigeria.

He stated that he was very excited to work with NCPC. His words, “we have a true partnership to grow together”. The Envoy thanked the NCPC boss for his excellent leadership style and passion for pilgrimage.

In his remarks, the Chief Executive officer of Air Peace airline, Chief Allen Onyema reaffirmed that sooner than later history would be made in Nigeria.

He affirmed that the airline has the capacity to airlift Nigerian pilgrims through direct flight to Israel successfully.