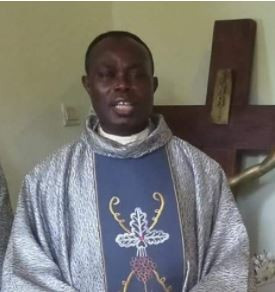 His Holiness, Pope Francis has named Reverend Father, Peter Chukwu, as the new Bishop of Catholic Diocese of Abakaliki.

The development was made known on Tuesday in a release by the National Director of Social Communications, Catholic Secretariat of Nigeria (CSN),Padre Mike Umoh, in Abuja.

TheFact Nigeria reports that before his appointment, Fr Chukwu was the Parish Priest of St. Patrick’s Catholic Parish, Nduruku-Amagu, and a lecturer at Ebonyi State University, Abakaliki.

He was born on November 5th, 1965, in Ededeagu Umuezekohohu, in the Catholic Diocese of Abakaliki.

The catholic priest attended the Seat of Wisdom Seminary School, Owerri, Imo state, where he completed his philosophical studies between 1985-1989, and then proceeded to Bigard Memorial in Enugu where he studied theology from 1990-1993.

Between 2000 and 2007, he studied at Franciscan University of Steubenville, Ohio, United States, and Marquette University in Milwaukee, United States where he obtained Doctorate in Philosophy.

He was ordained a Priest on July 3rd, 1999, (28 years ago) and was incardinated in the Catholic Diocese of Abakaliki.

He is the Spiritual Director, Novitiate of the Sisters of Jesus the Good Shepherd from 2017 till date.