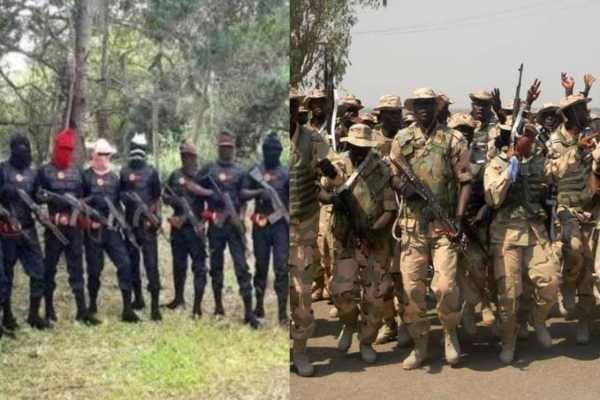 … As NASS, Pushes For More Funding For AFN

Some hoodlums suspected to be members of the proscribed Indigenous Peoples of Biafra, IPOB, have been killed in an encounter with security operatives in the Orlu area of Imo State.

A police source disclosed to Channels Television, that the incident occured while the hoodlums were on thier way to attack Orlu Police Station on the evening of Thursday, 6th May.

They were however ambushed and neutralized in a joint operation by the military and police.

It was gathered that several vehicles suspected to have been stolen and used by the militants in their operations were also recovered.

A video showing when the group was setting out for the attack has been release. The video shows suspected militants boarding vehicles said to have been snatched from thier owners for the botched operation.

According to the Imo State Police Public Relations Officer, PRO, Orlando Ikeokwu, the lifeless bodies of the hoodlums have been brought down to the Police Command Headquarters in Owerri, the Imo State capital, along with some vehicles that were seized from them.

Ikeokwu added that the gunmen, while they tried to attack the divisional police headquarters in Orlu, met heavy resistance from a group of joint security operatives on duty, and after an ensuing gun battle that lasted for several hours, eight of the gunmen were killed. The security operatives suffered no casualties.

Earlier on Thursday night, residents of Orlu reported that there was panic in the town due to sporadic gunshots, that made them scamper to safety. The panic increased after a video surfaced online, showing hoodlums brandishing guns and ammunition around town.

However, the new State Police Commissioner, CP, Abutu Yaro, while briefing newsmen upon assumption of office, has assured residents of safety, adding that the Command under his watch will out an end to the unwarranted killings and burning of security formation’s in the State.

He added that the Command has put strategic plans in place to ensure that Imo State remains peaceful.

In a related development, the Senate has, for the second time this week, continued to make a case for the country’s security agencies as they battle the various security challenges confronting the nation.

The heads of security agencies arrived the National Assembly, Thursday, in response to the invitation by the Upper Chamber last week over the alarming insecurity in the country.

At the end of the four-hour meeting behind closed doors, a decision was reached: the Executive are to come up with a supplementary budget for the Armed Forces.

Senate leader, Ahmed Lawan, had admitted that the Armed Forces had not reached thier optimum in fighting insecurity partly because of inadequate resources.

It is noted that Finance Minister, Zainab Ahmed had, on Tuesday, told the Senate Committee on Army that the Army got over 1trn naira as budget releases between January, 2019 and the first quarter of 2021.

”We pray that at the end of this interaction, we will see better ways and means in providing the necessary provision for resources to enable our Armed Forces continue with this national case of fighting to provide the kind of security that we need to protect the lives and properties of citizens”, Lawan said.