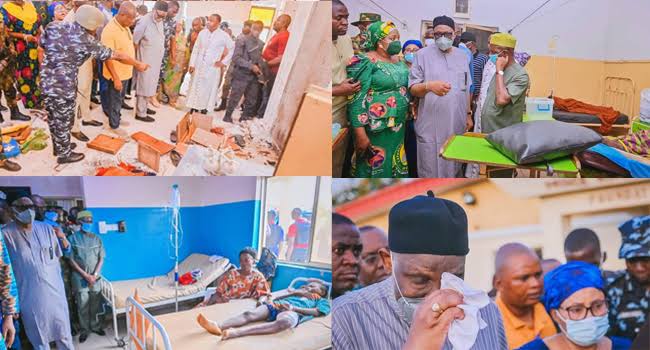 The Chief of Defence Staff, CDS, General Lucky Irabor, has disclosed that the assailants linked to the Owo Church attack have been arrested, two months after the incident.

General Irabor made the disclosure Tuesday, 9 August, during a parley with Executives and Editors of media organisations in Nigeria.

Irabor, during the briefing, announced that the attackers had been arrested and noted that troops who were in operation pursued the suspects and recovered some exhibits from them.

He also revealed that the search for more of the terrorists who are at large was still on.

“As regards the Owo incident, we have recovered the last vehicle they used for that operation and we made some arrests and we have also recovered some vital things which we are working on”, Irabor said.

The Defence Chief gave the names of some of those already arrested as follows: Momoh Ojo Abubakar, Aliyu Yusuf Itokpka, Auwal Ishaq Onimisi, Idris Ojo, and Idris Abdulmalik Omeiza, whom he said was one of the masterminds of the attack.

“Omeiza is one of the masterminds of the 5th June attack of the Catholic Church in Owo as well as the attack on a police station in Adavi Local Government Area of Kogi State that led to the killing of a policeman as well as weapons carted away,” he disclosed.

According to the CDS, Omeiza was arrested on Monday, 1 August 2022 at Eka Okehi Kogi State during an operation with other branches of security.

Also arrested on the 7th of August at Aiyetoro C in Ondo State is Idris Ojo, aged 32, who the CDS described as “one of the high profile ISWAP terrorists that escaped from Kuje”.

“Idris Ojo wasn’t done with his previous activities but was planning other deadly attacks along with his cronies before his arrest”, General Irabor said.

He said that the suspects would have been paraded in public view, but this could not be done as investigation was still on going.

Also, Governor Rotimi Akeredolu of Ondo State, who confirmed the arrest of the five suspected killers of over 40 worshippers at the Church, also revealed that some members of Ebira community in the area were getting involved in kidnapping.

At Divorce, Man Pays His Ex-Wife N3M Compensation For House Chores During Marriage