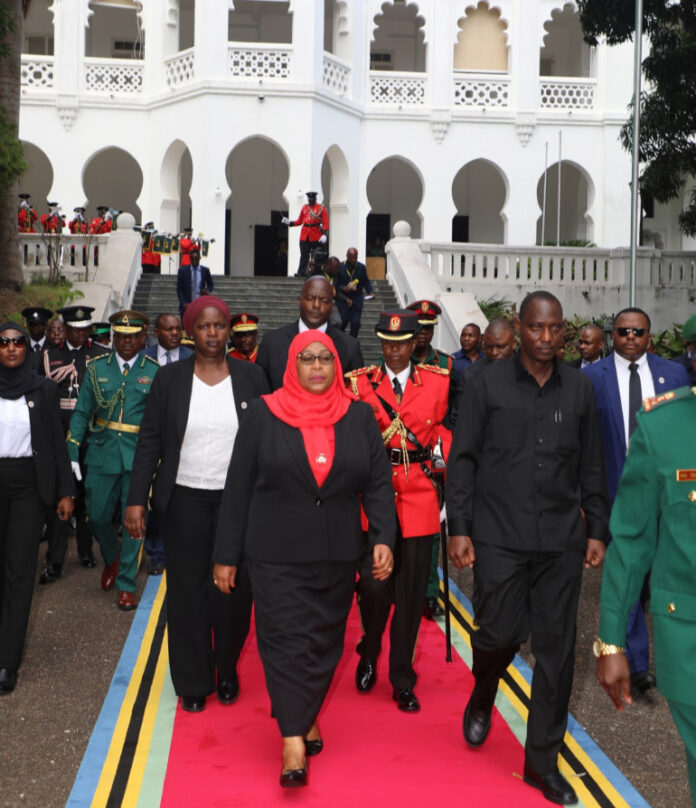 Vice President Samia Suluhu Hassan sworn in as president on Friday, after the sudden death of John Magufuli from an illness.

Tanzania’s soft-spoken Vice President Samia Suluhu Hassan on Friday was sworn in as the East African country’s first female president after the sudden death of John Magufuli from an illness shrouded in mystery.

“I, Samia Suluhu Hassan, promise to be honest and obey and protect the constitution of Tanzania,” said Hassan, dressed in a black suit and red headscarf before dignitaries at a ceremony in the commercial capital, Dar-es-Salam.

In her first public address as president, the 61-year-old leader announced 21 days of mourning for Magufuli and public holidays on March 22 and on March 25, the day the late president will be buried.

It is not the time to point fingers at each other but to hold hands and move forward to build the new Tanzania that President Magufuli aspired to.

“It’s not a good day for me to talk to you because I have a wound in my heart,” said Hassan. “Today I have taken an oath different from the rest that I have taken in my career. Those were taken in happiness. Today I took the highest oath of office in mourning,” she said, after being sworn in at 10am local time (07:00 GMT) on Friday. 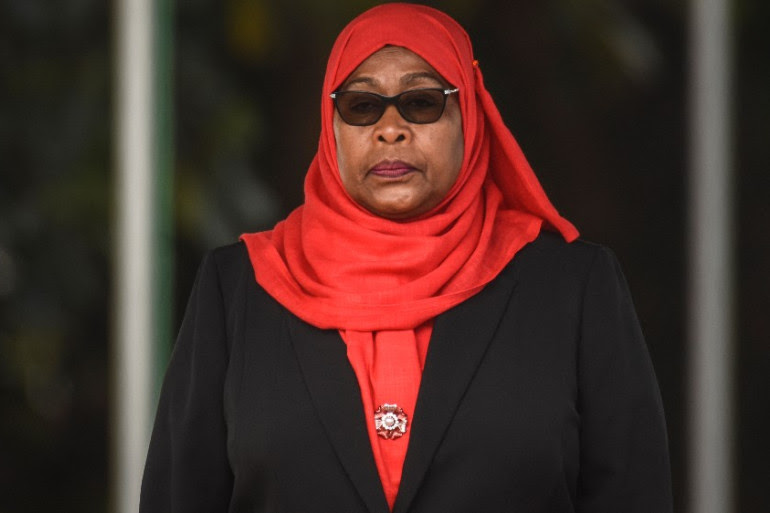 Hassan ascended to the presidency after President Magufuli’s death due to heart disease was announced by the government on Wednesday, more than two weeks after he was last seen in public.

Magufuli’s absence since February 27 had fuelled speculation about his health and sparked rumours he had contracted COVID-19, although officials had denied he was ill.

Tanzania’s new President Samia Suluhu Hassan is escorted after taking oath of office following the death of her predecessor John Magufuli [Handout phpto via Reuters]According to Tanzania’s constitution, the vice president serves out the remainder of the term of a president who dies in office. Magufuli, who was first elected in 2015, secured a second five-year term in polls in October last year.

The constitution also states that after consultation with their party, the new president will propose a deputy, the choice to be confirmed by the votes of no fewer than 50 per cent of the National Assembly.

Al Jazeera’s Catherine Soi, reporting from Kenyan capital Nairobi, said: “She has just given her maiden speech and it was a very emotional tribute to her predecessor John Magufuli.”

“I’ve been speaking to people in Tanzania to get a sense of what she is about and what they’re telling me is that her leadership style is very different from the late president. They say she listens to counsel more and is not one to make unilateral decisions.”
‘Time to stand together’

Described as a softly spoken consensus builder, Hassan has become the country’s first female president and the first to be born in Zanzibar, the semi-autonomous island in the Indian Ocean that forms part of the union of the Republic of Tanzania.

She said that Magufuli “who always liked teaching” had prepared her for the task ahead. “Nothing shall go wrong,” she said, urging all the country’s people to work to unite the nation.

“This is the time to stand together and get connected. It’s time to bury our differences, show love to one another and look forward with confidence,” she said.

“It is not the time to point fingers at each other but to hold hands and move forward to build the new Tanzania that President Magufuli aspired to,” she said, amid opposition claims about the cause of Magufuli’s death.

Residents of the Kawe Kanisani district watch the swearing in of new Tanzanian President Hassan [AFP]Hassan rose through the ranks over a 20-year political career from local government to the national assembly. A stalwart in the ruling Chama Cha Mapinduzi (CCM), she was named Magufuli’s running mate in the 2015 presidential campaign.

The pair were re-elected in October last year in a disputed poll marred by allegations of irregularities.

Her leadership style is seen as a potential contrast from Magufuli, a brash populist who earned the nickname “Bulldozer” for muscling through policies and who drew criticism for his intolerance of dissent.

Magufuli was a vocal COVID-19 sceptic who urged Tanzanians to shun mask-wearing and denounced vaccines as a Western conspiracy, frustrating the World Health Organization (WHO).

Al Jazeera’s Catherine Soi said that Hassan did not talk about coronavirus.

“A lot of people are looking to see if she will change strategy. Magufuli had faced a lot of criticism for how he handled the disease. He never put the country in lockdown and never encouraged people to wear masks or sanitise,” she said.

“People are waiting to see how she is going to deal with this disease and if she’s going to change the policy that had been in place by Magufuli.”

Hassan’s swearing in will assuage opposition fears of a constitutional vacuum.

“The VP has to be sworn in immediately,” opposition leader Zitto Kabwe told Reuters by phone from Dar es Salaam on Thursday. “The constitution doesn’t allow a vacuum … I will be concerned if the day passes without her being sworn in.