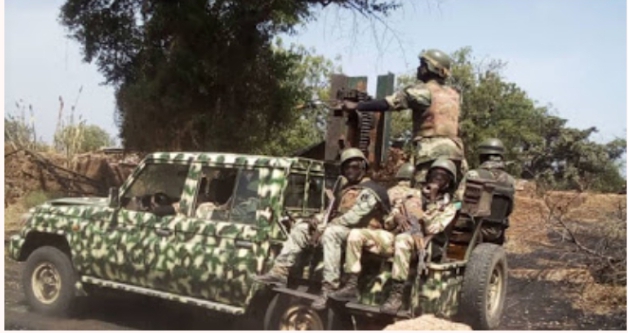 A statement issued by the Army today, reveals that the operation, occured on Saturday, 01 May, when terrorists in their numbers attempted to disrupt the peace that has been enjoyed by the border town, but were met with stiff resistance as the troops in the area took them on in a fierce fire fight which lasted about an hour.

In a related development, on Sunday, 02 May, another band of Boko Haram terrorists, while on a criminal mission in Ajiri town in  Konduga LGA of Borno State, were taken on by troops in a gun battle that left several retreating terrorists with gun shot injuries and the troops on thier heels.

It was gathered that the terrorists having reached part of the town, initially burnt down nine houses and killed some innocent residents before they were engaged by the troops deployed in the area.

Unfortunately however, two personnel paid the supreme price in the encounter.

The Chief of Army Staff, COAS, Lieutenant General Ibrahim Attahiru, while commending the troops for their resilience and their determination to keep their areas free of terrorists activities, further charged them to sustain the renewed vigour in discharging their duties.