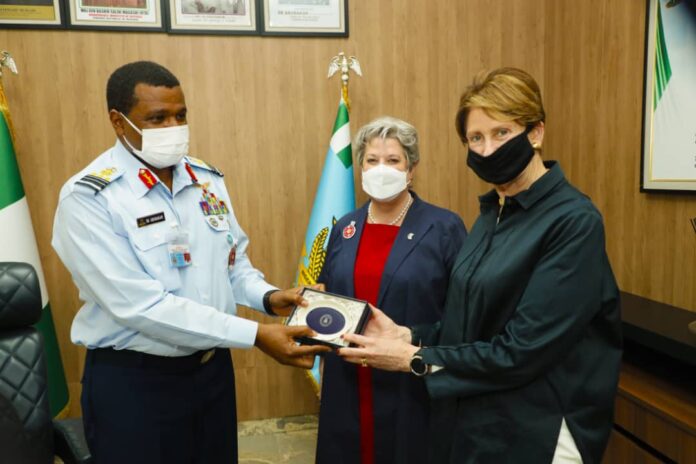 The United States Department of Defence has promised to enhance its defence cooperation with the Nigerian Air Force (NAF) in the fight against insurgency and other forms of criminality in the Country while reassuring the Service of its commitment towards strengthening strategic partnership.

The assurance was given Tuesday, 5 January 2021, by the Secretary of the United States Air Force (USAF), Honourable Barbara Barrett, who was on a courtesy visit to the Chief of the Air Staff (CAS), Air Marshal Sadique Abubakar, at the Headquarters NAF (HQ NAF) Abuja alongside, the United States Ambassador to Nigeria, Her Excellency, Ambassador Mary Beth Leonard.

Hon Barrett noted that the partnership with the NAF would be in the areas of equipment and platform acquisition, training as well as additional opportunities in the area of air operations, amongst others.

Speaking further, Hon Barrett disclosed that the partnership had become necessary to further enhance professionalism and build the needed capacity for the effective and efficient employment of air power. According to her, “We appreciate the past and we also look forward to a better relationship in the future. We are also looking at ways that we can impact our relationship through equipment, training and various opportunities for operations, maintenance and use of aircraft and equipment. We are really conscious that the Air Force of Nigeria is a highly respected and professional entity and we think that, throughout Africa, the NAF is an entity we would like to partner with”, she said.

The Secretary, USAF, noted that the United States (US) was aware of the security challenges confronting Nigeria and therefore reassured the NAF of her support. “We are conscious of the challenges that the country is facing, especially in the North East and North West. The entire world needs Nigeria to be successful. Accordingly, we will partner with you in appropriate ways. We are very much on your side to make great things happen; to get the right things done and to do them in the right way. We would like to build on our past and grow a stronger relationship. We are attentive to the need to use available resources well; we know that has been something that the Nigerian leadership has been attentive to as well. So as we build that future, we want you to know that it is a great US-Nigeria relationship that we look forward to enhancing”, she said. She therefore expressed her appreciation to the CAS for the warm reception accorded her and her team.

In his remarks the CAS described Hon Barrett’s visit as a demonstration of the commitment of partnership between the two countries’ air forces. He noted that the US played a significant role in the successes being recorded in the theatre of operations of the NAF. He disclosed that NAF personnel had been trained in various specialties in the US, with some currently undergoing training. According to him, “We are excited that we are making substantial progress in terms of acquisition of the A-29 Super Tucano aircraft. We are also very excited that our officers and men are in the US and from the reports we are receiving on a weekly basis, they are making substantial progress. To us, it is very exciting and we are keenly following the progress they are making and looking forward to receiving them back as quickly as possible so that we can deploy them to address some of the challenges that we are facing.”

Air Marshal Abubakar noted that the successes recorded in the last few years as a Service could not have been possible without the support of the US. He disclosed that the NAF had enjoyed a lot of support from the US in terms of intelligence sharing and training, amongst others. “The fast-roping course was conducted recently and I want to say that most of the personnel who went through the programme are performing excellently well in various theatres of operations,’ he said.

The CAS further intimated the visiting team of the progress being made at 407 Air Combat Training Group (407 ACTG), NAF Base Kainji ahead of the arrival of the A-29 Super Tucano aircraft. He noted that quite a number of officials from the US had visited the facilities while the NAF was doing everything humanly possible to secure the Base and provide an enabling environment for the aircraft to operate effectively and efficiently. He stated that the NAF had ensured that a sufficient number of SF and Force Protection Elements were deployed to Kainji to ensure that whenever the Super Tucanos are deployed, there would not be any challenge. According to him, the NAF had upgraded facilities in the Base while about 4.1km road network had been constructed within the Base. 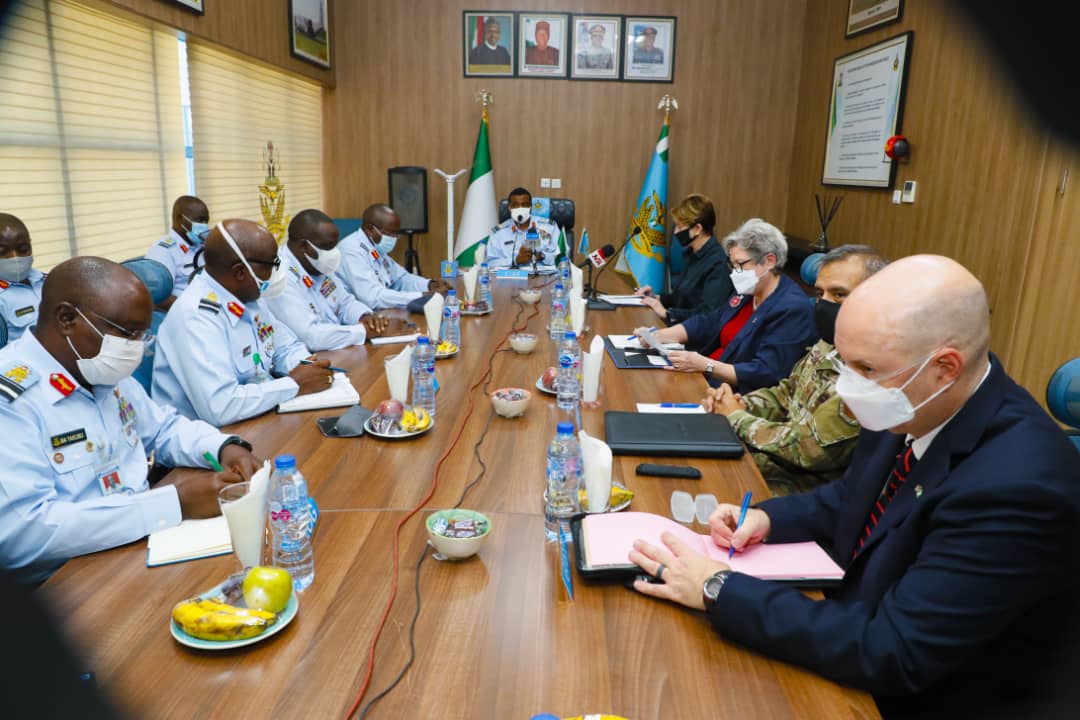 Air Marshal Abubakar disclosed further that appropriate accommodation had been remodelled for the US officials and Super Tucano Instructors for them to have a conducive environment to carry out their tasks. He further disclosed that the NAF was making arrangements for alternative power and water supply in Base, while upgrading the medical facility to a full-fledged NAF hospital. “We have also provided a gymnasium and some recreational facilities which, we believe, the instructor pilots coming from the US will be comfortable having”, he stated.

In the area of training, the CAS, while thanking the US for the opportunities given to the NAF to train fighter pilots, highlighted further areas of training to include tactical training for C-130H pilots to enable the NAF to use the C-130H to air-drop food and other humanitarian relief items, especially in the North East where it is currently using the Bell-412 helicopter for such missions with a limited drop capability of about 300Kg per sortie. Air Marshal Abubakar equally noted that the NAF was also interested in Aeromedical training to further boost its “Winning Hearts and Minds” efforts in the North East, where it currently has two Level 2 Hospitals at the Bama and Dalori Internally Displaced Persons (IDPs) Camps, that have been operating for more than 4 years. He stated further that the Cancer Screening Centre in NAF Base Maiduguri is also open to IDP who also benefit from other free secondary medical services on the Base from time to time.

In attendance, during the courtesy visit were some HQ NAF Branch Chiefs as well as the Nigerian Defence Adviser in Washington DC and members of the Secretary of US Air Force Team.

1 in 3 Nigerians Die From Non-Communicable Diseases -WHO