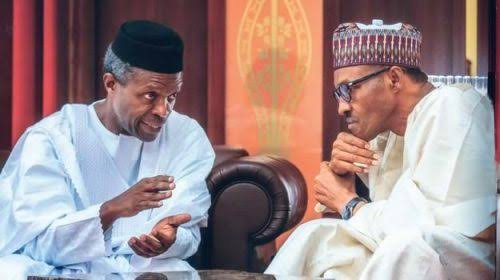 Vice President Yemi Osinbajo on Monday briefed President Muhammadu Buhari on his activities and decisions reached on his behalf while the President was away on a medical check up to the United Kingdom.

President Buhari had returned to the country on Thursday last week  after spending 16 days for his medicals and rest.

President Buhari received the briefing on Monday at the State House in Abuja behind closed doors.

The President had left Nigeria on Tuesday, March 30, after holding a security meeting with defence and intelligence Chiefs, and other heads of security agencies.

The President reportedly looked resplendent on his white attire with the Vice President who contrasted the sartorial elegance with a black attire.

Although VP Osinbajo wasn’t handed the office of “Acting President” while Buhari was away, he actually did represent the President in Imo and Ebonyi States and at a event of Engineers and scientists.