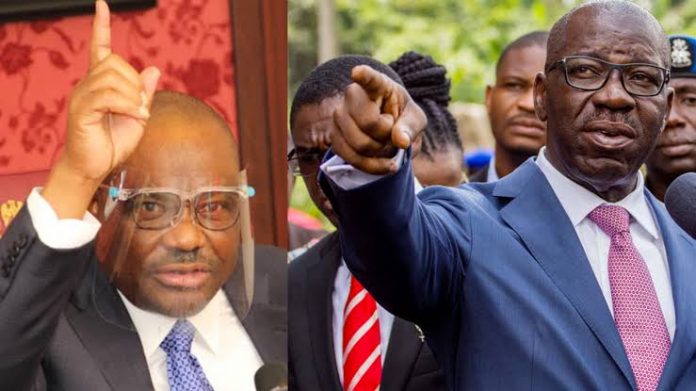 These are certainly not the best of times for the main opposition party in the country, the Peoples Democratic Party (PDP), as two of its Governors engage in verbal war capable of dimming the party’s chances in future elections.

In the last few days, the Rivers State Governor, Nyesom Wike, and his Edo State counterpart, Godwin Obaseki, had engaged each other in a fierce media war, using less than salutary words in the process.

TheFact Nigeria gathered that It all started when the Deputy Governor of Edo State, Philip Shaibu, complained that supporters of Obaseki in the Edo chapter of the PDP, were yet to be integrated into the party’s mainstream.

To this end, Shaibu served a notice of possible defection of the aggrieved members from the ruling party in the state.

Angered by what seemed like a subtle threat, Wike called out the Edo Deputy Governor, even as he urged sanction by the National Working Committee, NWC, of the party.

Dissatisfied with the tirade, Governor Obaseki placed an advertorial in some national dailies, wherein he referred to Wike as a “bully”.

Among others, Obaseki warned that “PDP is not your personal property”, and that “Edo State cannot be procured”.

According to him: “The concerns expressed by my deputy governor bordered on pertinent issues affecting the PDP in Edo State which since the September 19th 2020 elections, has been able to register over 500,000 members; and till date, these new members have not been properly integrated into our party after two years.

More worrisome is the fact that old members of Edo PDP, who are open to inclusion and supportive of building a large party are being vilified and ostracized by a cabal purportedly led by Chief Dan Orbih, who is your perpetual guest in Port Harcourt and is remotely used to orchestrate the destabilization of the party in Edo State.

“I appeal to all well meaning leaders of our great party to call Governor Wike to order to desist from his current unguarded and disruptive tendencies. From all indications today, PDP 1s set to take over the leadership of Nigeria provided we can rein in the self interest of a few leaders to put the task of rescuing Nigeria above their personal ambitions”.

Reacting to this at the commissioning of community secondary school, Omuanwa, in Ikwerre LGA, Wike said: “Obaseki said I’m a bully, but he came to beg a bully for ticket, a bully was his campaign DG, and a bully bullied him into Edo state government house”

“It didn’t end there, he still came back with his wife to thank the bully after the election”

“I slept in Edo State for three days just to deliver Obaseki, but today, I’m a bully”

“If you check the DNA of Obaseki, what you’ll see is betrayal, serial betrayal and ungratefulness”

In the face of this, however, Thefact gathered that the fight centres around who controls the PDP in Edo State.

Reliable sources, who spoke in confidence with our correspondent alleged that, while Obaseki seeks to have absolute control of the party in the state, Wike, on the other hand, hopes to have a grip of the party through Chief Dan Orbih.

Phillips Consulting, UBA Under Investigation For Alleged Violation Of NDPR