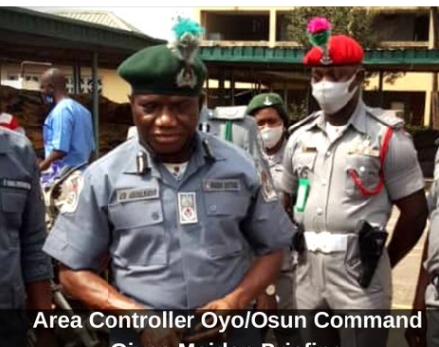 The Area Controller of the Oyo/Osun Command, Nigeria Customs Service (NCS), Comptroller Adamu Abdulkadir has talked tough on smugglers, as zero tolerance is the current administration’s watchword regarding all illegal and corrupt practices, reiterating the Oyo/Osun command’s commitment to enforcing the said mandate to curb insecurity, save ailing local industries in the country as well as improve the health conditions of the citizens.

Comptroller Adamu Abdulkadir, who disclosed this while speaking to the media, said that the Command has generated 4.8 billion naira for the month of January alone, while between 19th November 2020 and 31st January, 2021, the command made seizures as well as detentions worth 393 million naira.

The Area Controller appreciated the valiant efforts of the officers and also acknowledged the contributions made by other units of the Service, including sister agencies, as well as the cooperation of communities and stakeholders in the area, towards the Command’s pursuit to achieve their goals.

Court Jails One, Two Others Arraigned For Fraud In Maiduguri