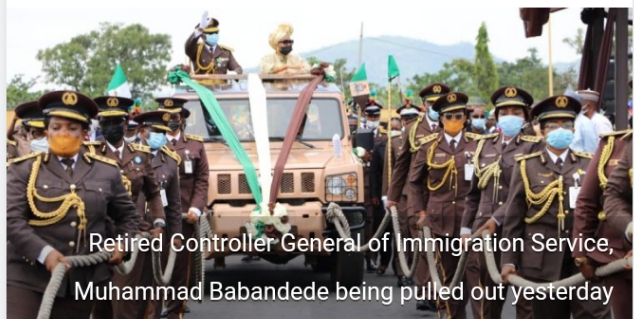 It was a colourful ceremony at the premises of the Nigerian Immigration Service, NIS Headquarters to mark the last day in office for the outgoing Comptroller General, Mr. Mohammed Babandede.

The pull out parade, held Monday, 13 August, attracted several dignitaries from within and outside the Federal Capital city, who came to celebrate the outgoing Immigration Chief for meritorious service rendered during his tenure at the helm of affairs in the Service.

TheFact Nigeria had on Friday, 10 September, reported on the valedictory message delivered by Mr. Babandede, in which he charged officers and men of the Service to build upon and sustain the achievements made during his tenure.

The outgoing CGI expressed gratitude to God for the countless privileges he had enjoyed as a staff of the Service, from his first day in office as far back as September, 1985, and for a life well spent as a Chief Executive, having become the 16th Comptroller General of the Service.

He paid homage to many whom he said had influenced his career, among whom are his former bosses, as Directors and CGIs such as Muhammadu Damulak, Sahabi Dange, Lady Nwizu and Alhaji Garba Abbas. Others are Senator UK Umar, CJ Udeh, Lady Uzoma, RB Musa, David Paraddang and MK Abeshi.

Speaking on some of his achievements, Babandede mentioned a strategic plan developed shortly after his appointment as CGI to address
acute shortages of offices and barracks accommodation in the system.

“We went into action and I had to promise that we shall build and commission at least two Command Building Complexes yearly. Thank goodness, we did not fail. The Sokoto State Command Office Complex commissioned two weeks ago was the 12th of such Office Complexes we built and delivered within the period of my stewardship. There are 8 command buildings at different stages of completion”, he said.

With regards to the Nigeria Visa Policy 2020, Babandede recalled that it was launched by President Muhammadu Buhari, and is the first comprehensive approach of developing a visa policy that addresses “our socio-economic needs as a nation. The task before the next leadership is effective implementation. We are almost set to launch the ‘The one Global e-Visa’ which make Nigerian Visa processing more efficient and transparent”.

The outgoing CGI further said that e-border project had commenced where 84 land borders would be monitored real-time-online with a pilot case linking headquarters with one of the BCP.

“Our Border security and Migration Management efforts got some useful interventions to the extent that most of our Control Posts have been upgraded and installed with modern communication and logistics facilities. Our Migration Information and Data Analysis System (MIDAS) has been described by IOM as the largest and most complex migration system in the world. We have successfully connected all the nation’s International Airports and twenty-three Land Border Posts to the MIDAS platform. With this facility, generation and processing of migrants’ travel history has been simplified while intelligence gathering and information sharing capability have been improved”.

On staff welfare, Babandede said, “we reversed the age long situation where personnel had to stay for long without promotion. We ensured that promotion exercises are organized yearly for all eligible personnel. Available records have it that over Fifteen thousand members of the workforce have enjoyed one form of elevation or the other since 2016. The Service is grateful to the ministers who chair the Board, directors, Commissioners and other members”.

The outgoing Immigration Chief further took pride in the ability of his team to deliver a modern Technology Building for the Service during his period of stewardship. According to him, the edifice had “completely changed the fortunes of the Service and placed it centrally in the nation’s security architecture. It is a revolution indeed. In that edifice, the NIS sees the world, feels the world, relates with the world and contributes its quota to both national and international security community, by simply pushing the buttons. With the Technology Building, we have delivered one of the most robust, complex and pragmatic security and migration management agencies in the world”.

Babandede also mentioned that NIS had now been transformed into a paperless agency, which he said is “not only a super milestone but fantastic and should be sustained. The implication of going digital is enormous – less staffs in the offices and more at our borders, transparency, efficiency and flexibility”.

He called for the deepening of these efforts and gestures that have held the Service as “one big family”, and counselled all “to appreciate each other and allow enough space for everyone to operate and make useful contributions to our great Service and nation as I exit”.

He also thanked all officers and men, “for contributing in the overall development of the entire Service”, and charged the leadership of the country to find a way to keep the talented working in public Service before they are taken away by people who can pay more.

Babandede concluded his speech by noting that the infrastructure had been provided, policies and manuals developed, and a conducive environment created, which he called on the leadership to sustain, maintain and implement.

Dignitaries present at the ocassion include the Inspector General of Police, IGP Usman Alkali Baba, the Minister of Interior, Ogbeni Rauf Aregbsola, the Corps Commandant, Nigeria Security and Civil Defence Corps, NSCDC, Dr. Ahmed Abubakar Audi, and a representative of the Chief of Army Staff, COAS.

Highlights of the event include the march past display by personnel, and the symbolic pulling of the pulling van by some senior officers of the Service.