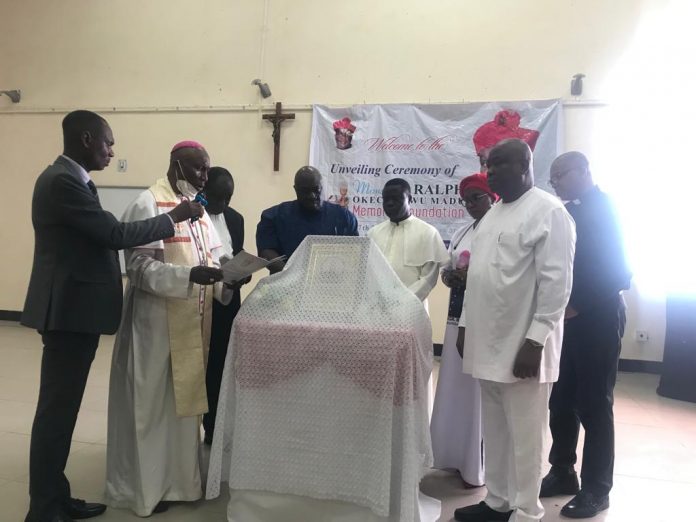 The chairman of the occasion, former senator representing Imo West, Ostia Izunaso, who spoke on Monday at Saint Gabriel’s Catholic Chaplaincy, Durumi in Abuja, said the exemplary life of the Monsignor is the reason for immortalising him.

TheFact Nigeria reports that the MROMMF is aimed at developing pathways towards quality healthcare provision,education and caritative work among the poor and the needy.

Izunaso said, “This is the beginning of a serious work we all have to do. We are just unveiling, after the unveiling we have serious assignments in our hands . To actualize the dreams of those that initiated this .

“By this time last year, we were receiving phone calls on the death of Monsignor Ralph Madu, which was shocking. However, I want to state that he is not dead, but alive in the Lord. After the unveiling of the foundation in his honour, we will have a task on our hands, which is fulfilling the dreams of the initiators.

“Monsignor Ralph Okechukwu Madu was erudite, well educated. Even after he got a PhD, he took a course in Mass Communication, while lecturing in Enugu. He was a good man.

“If he wasn’t a good man, there wouldn’t be this love and massive turnout this Monday evening. So, his memory lives on and we pray the foundation will be sustainable.”

In his welcome address, the Chairman of the MROMMF, Rev. Fr. Jude Ike, said that the journey to the formation of the foundation was birthed in June last year, few months after the death of the Monsignor.

“What is happening here this night, that is the unveiling of a foundation in the memory of Monsignor Ralph Okechukwu Madu, started in June last year.

“when many of his friends suggested we immortalise him through a foundation. We had to draw up a list of his friends, well wishers and associates.

“We went ahead to register the foundation with the Corporate Affairs Commission, in readiness for its launch today, marking the anniversary of his death.

“To the glory of God, the project is already a success, judging from the turn out of priests and those he associated with over the years. It is our sincere prayer that the Foundation will be sustainable,” he said.

Imo State governor, Hope Uzodinma, who was represented by his special adviser( Abuja Liaison), Jimmy Imo, advised the members of the Board of Trustee( BoT) to do everything within their power to sustain the legacy and vision of the late Monsignor.

He said,” they have started very well. My advise to them is to sustain the tempo of what they have stated. You see that it is not the launching. This is like a sensitization programme. Subsequently, they will plan for the foundation properly, he said.

Highlight of the occasion was the blessing of the crest in memory of Monsignor Ralph Okechukwu Madu by the the Chief Celebrant and Bishop of Minna, His Lordship, Most Rev. Dr. Martin Uzoukwu.