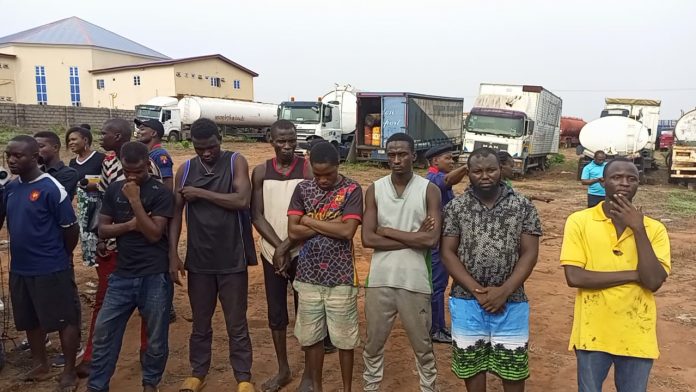 Operatives of the Nigeria Security and Civil Defence Corps, NSCDC, in Delta State, have arrested 17 suspects for illegally dealing in petroleum products.

This was disclosed Sunday, by the State Command’s Public Relations Officer, DSC Emeka Peters Okwechime, while parading the suspects in Asaba, the Delta State capital.

TheFact Nigeria notes that DSP Peters attributed pipeline vandalism, crude oil theft, all round criminality, corruption, and economic sabotage among others, to such factors as the drop in the nation’s GDP, high inflation rate, skyrocketing prices of goods and services amongst other bitting economic challenges and the hardship faced in the country presently.

Okwechime disclosed that the arrests were made by the Commandant General’s (CGs) Special Intelligence Squad at Ughelli Delta State while the suspects were conveying the products suspected to be illegally refined Automated Gasoline Oil, AGO, locally called Diesel, from Bayelsa en route northern States in Nigeria.

Okwechime noted that pipeline vandalism, crude oil theft, economic sabotage among other social and economic crimes has drastically reduced especially in Delta State, since the emergence of Dr Abubakar Audi Ahmed, and Akinsanya Iskilu Abiodun, in the helm of affairs at the National and State Headquarters respectively.

He further solicited for speedy judicial process on all NSCDC cases pending in court in order to free the NSCDC Exhibit yard to accommodate more trucks “as we anticipate mass arrests of more trucks, more tankers and suspected vandals, crude oil thieves amongst others to be arrested, investigated and be brought to justice and also to forestall the unknown”.

The PRO, while reassuring Deltans of the resilience and the continued commitment of the NSCDC in keeping faith with the civilian population, maintained that the combatant morale of the Corps to protect all Government Critical National Assets and Infrastructure, haw been rekindled by the CG’s new welfare packages for the personnel and that of Commandant Akinsanya Iskilu Abiodun led administration in the State Command.

He charged the leaders and youths in the oil rich region, to report all cases of vandalism, crude oil theft, illegal dealings on petroleum products, and other social and economic crimes, to any NSCDC office closer to them knowing fully well that they must say something when they see something.

Of the arrested suspects, Okwechime assured that they will be charged to court as soon as investigation is concluded, to serve as deterrent to others, and urged residents in the State to go about their legitimate business without fear of molestation.

FG To Enhance Growth Of Nation’s GDP Through MSMEs