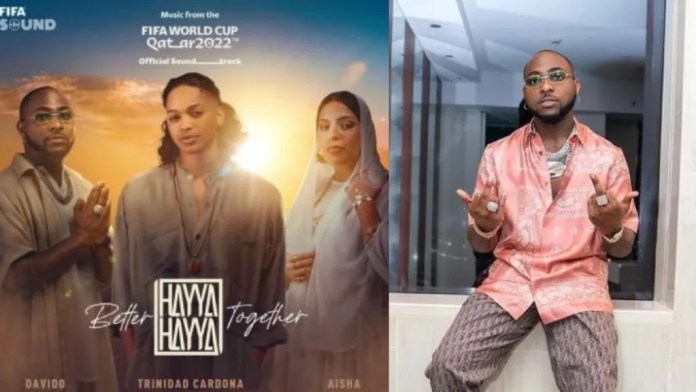 Days after the Nigerian Super Eagles lost to Ghana in the FIFA qualifying match, Davido announced that he is featured in the official FIFA soundtrack for 2022 World Cup in Quatar.

Taking to his verified Twitter and Instagram pages, Davido disclosed that he is pleased to have featured on the Qatar 2022 official Fifa World Cup song.

He wrote:“Pleased to have featured and worked on the official @fifaworldcup Qatar 2022 song with @redone @trinidad @aishaofcl ❤️⚽️! Naija no make am but… NAIJA STILL MAKE AM! #fifaworldcupqatar2022.”

#DavidoQatar2022 has been trending on the popular microblogging platform, Twitter, after he disclosed this great feat.

He becomes the first Nigerian to be featured in FIFA World Cup soundtrack.

Davido alongside, Trinidad Cardona and Aisha will perform the official World cup song titled “Hayya Hayya” which means ‘Better Together’ in Qatar.

Fans of the music star who calls themselves the “30BG” have taken to social media platforms to hail the DMW boss.

They referred to him as the treasure of the nation and made him one of the trending conversations online.