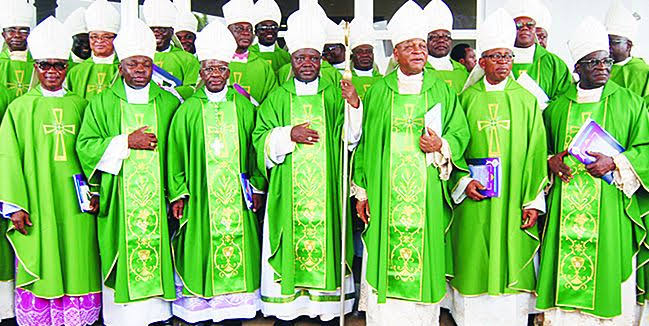 Catholic Bishop Conference Of Nigeria (CBCN) has called on the federal government to rise up to it’s responsibility of tackling those terrorizing the nation, saying Nigerians are tired of listening to flimsy excuses.

The CBCN made the call on Monday in a statement signed by it’s President and Archbishop-Elect of Owerri, Most Rev. Lucius Iwejuru Ugorji.

TheFact Nigeria reports that the CBCN’s call is coming on the heels of the recent bloody attack on Abuja- Kaduna train .

According to the statement which was made available to by the National Directorate of Social Communications, Catholic Secretariat of Nigeria, Abuja,
“The news of the recent attacks on trains by terrorists has attracted public outcry, outrage and grief. Nigerians are still mourning with anguished hearts over the brutal slaughtering of fellow citizens during those bloody attacks. We unequivocally condemn those brutal acts of barbarism and brazen assault on our sovereign dignity as a nation.

“At this moment of nationwide sadness and sorrow, the Catholic Bishops of Nigeria stand together in solidarity with the bereaved, the wounded, and those still missing. We pray that God grants eternal rest to the departed, consolation to bereaved families, healing to the wounded and a safe return to those still missing

“The train route from Abuja to Kaduna has been the safety net for thousands of travellers commuting between both cities. Now terrorists have proven that no one is safe on that route anymore. Just last week, there were also reports that over 200 terrorists on motorbikes brazenly rode through the runway of the Kaduna International Airport in broad daylight, killing at least one person.

“All these occurred shortly after the incessant brutal attacks and killings by faceless terrorists in communities of Southern Kaduna and many other parts of the Middle Belt. All these atrocities against the people and the nation happen without a single arrest or prosecution seem to give credibility to the widespread belief that the government is complacent, helpless or compromising.

“Considering the billions of Naira appropriated for security and the fight against terrorism in recent times, it is difficult to imagine that a large number of terrorists, who unleashed terror on unarmed and law-abiding citizens, can disappear in broad daylight without a trace.

“It is indeed very hard to believe that our security apparatus lacks intelligence or the ability to fight and defeat terrorists in our nation. Nigerians are sick of flimsy excuses and bogus promises from the government to deal with terrorists. As a mark of honour, the government should rise to its primary responsibility of protecting the life and property of its citizens.

“Our country has long teetered on the precipice of a failed state. Government should, therefore, stop trying to play the ostrich as the nation profusely bleeds and take urgent steps to unmask these marauding terrorists and their sponsors without further delay.

The statement further said, “The Catholic Bishops of Nigeria are also concerned with the lingering face-off between government and the Academic Staff Union of Universities (ASUU) with its frustrating effects on young students, whose academic aspirations and ambitions are disrupted by a strike with no end in sight.

“Our hearts also reach out to many Nigerian citizens who languish for hours in long queues at gas stations to buy fuel at exorbitant prices. With severe hardship surrounding them at every turn, our countrymen and women seem condemned to a life of wanton suffering.

“They groan daily in pain with anguished hearts and seem resigned to a feeling of hopelessness and helplessness. This is totally unacceptable. We, therefore, call on the government to be moved by the plight of our people and take effective measures to liberate them from avoidable pains and agony.

“As a dark cloud of uncertainty seems to be hanging over our nation, many Nigerians are strongly tempted to succumb to feelings of cynicism or despondency. At a trying time like this, when dare-the-devil terrorists seem to be having a field day, we should recall the comforting and assuring words of Holy Scripture: “Be strong and of good courage, do not fear or be in dread of them: for it is the Lord your God who goes with you; he will not fail you or forsake you” (Deut. 31:6), the statement read”.