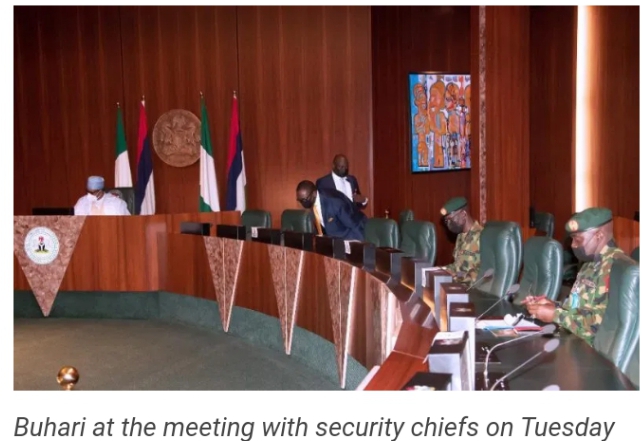 The National Security Adviser, NSA, to President Muhammadu Buhari, retired Maj.-Gen. Babagana Monguno, has expressed confidence that the military will bring the nefarious activities of  bandits, kidnappers as well as thier collaborators, to and end.

Monguno, while briefing newsmen on the outcome of the meeting held with service chiefs earlier today at the State House, disclosed that the President had given the service Chiefs marching orders to identify and crush heads of bandits, kidnappers and their local collaborators.

TheFact Nigeria reports that, according to Monguno, the president warned that his administration would not accept a situation where the security agencies are reactive rather than being proactive in the fight against insurgents, bandits and other criminal elements.

“On issues of kidnapping and banditry – these menaces still persist especially in the North West and the North Central zones.

”Mr President has stated very clearly that this problem must be brought to an end but using the traditional means that the armed forces have been trained to deploy”.

He said that President Buhari had made it abundantly clear to both the intelligence and operational elements that their first assignment will be to identify the kingpins of these bandits and kidnappers and take them out in order to restore confidence in those areas, as he will no longer tolerate a situation where bandits and kidnappers are the ones dictating the pace and setting the tones.

Of agents of disunity across the country and people creating chaos, disunity and disharmony among peace-loving citizens, the NSA said, “I’m also to send out a warning to those people who think they can continue to behave in a manner that undermines national security.

“Those people engaging in all kinds of underhanded, unscrupulous, mischievous and deceitful practices, people who are working with those that are in government, in particular, critical agencies of government.

“These people will be brought down to their knees’’.

Others in attendance were the National Security Adviser to the President, retired Maj.-Gen. Babagana Monguno, Director-General of the Department of State Services, Yusuf Bichi, Director General of the Nigeria Intelligence Agency, Ahmed Rufai and the Inspector-General of Police, Muhammed Adamu.

NDLEA Seizes N32bn Worth Of Cocaine At Lagos Port