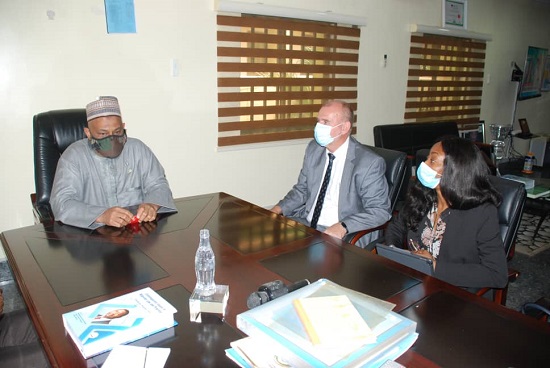 Director General of the Standards Organization of Nigeria, (SON), Mallam Farouk Salim  has advised Danish companies to venture into local manufacturing in Nigeria in view of the large market occasioned by Nigeria’s over 200million population.

This advice was given when SON’s Director General, Mallam Farouk Salim received the Consul-General of the Royal Danish Embassy in Nigeria Mr. Per Christenson in audience in Abuja.

TheFact Nigeria gathered that the Embassy of Denmark and Nigeria have resolved to collaborate and strengthen economic ties between the two countries through the Standards Organisation of Nigeria.

The Consul-General said the Embassy’ was committed to establishing a close working relationship with SON to strengthen economic ties between Nigeria and Denmark through standards implementation and enforcement.

He expressed concerns about faking of products of Danish origin in Nigeria, pointing out that an indigenous company in Denmark discovered that about 49 per cent of its products (compressors for air-conditioning and refrigerators) circulating in the Lagos markets were fake.

Mr. Christensen commended the Nigerian Police for providing security support to the Danish company to undertake a raid through authorized legal procedures.

He therefore appealed to the Director General for SON’s support in sanitizing the markets and getting rid of the fake products as well as bringing perpetrators to book.

Responding, Mallam Salim stated that the SON Act empowers it to prosecute all forms of standards infractions such as the recent docking of some individuals involved in adulteration of engine lubricants in Lagos.

Mallam Salim assured the Danish Consul-General of SON’s willingness to partner with the Embassy and others in the fight against the distribution of fake and substandard products in Nigeria.

He urged the representatives of Danish Companies in Nigeria to always subject their imports to the SONCAP regime and provide necessary information on suspected fakers to the SON Inspectorate and Compliance Department to ensure that culprits are brought to book.

Military, Others Conduct Joint Operation To Restore Peace In A/Ibom