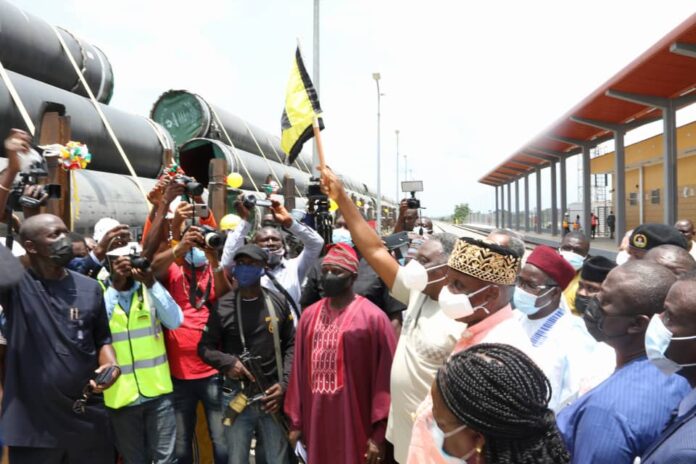 The minister of transportation, Rotimi Amaechi, while commissioning the project  at the UJevwu rail station, in Delta state  on Friday  said the freight service is a partnership between  the Nigeria Railway Corporation ( NRC) and Nigerian National petroleum Corporation (NNPC) .

According to the minister, the rail line would facilitate the movement of materials for the Ajaokuta-Kaduna-Kano gas pipe project.

This was as he further disclosed that the partnership would  hasten the completion of the project and improve the electricity supply for domestic and industrial usage.

According to the minister, “This laudable achievement will definitely boost the Gross Domestic Product (GDP) and equally enhance the socio-economic development of the communities living along the route. The project is for the benefit of these communities and Nigeria generally, irrespective of political affiliation.

“The modernization of railway in Nigeria is not confined or restricted to any geographical location in the country. It is the intention of this present administration to ensure that every part of the country is linked with standard gauge railway lines.

“Whilst, the Federal Government will continue to rehabilitate and maintain the existing narrow gauge, other state and zones will be availed with the opportunity of railway modernization project within their geographical zone.

“It is universally acknowledged that a developing country with a large population such as Nigeria must develop a robust transport system like modern and functional rail system, which is undeniably instrumental to creating much needed socio-economic transformation and industrial development and in enhancing more efficient, land-based, affordable mode for mass transit and freight services

Amaechi recalled that the federal government had promised to embark on wealth creation projects, through various interventions, including execution of projects that would provide direct and indirect employment opportunities to citizens.

Commenting on the patronage level on the Warri-itakpe rail service,  the minister said, “Reports available suggests that patronage on this route has increased by over 200% in the last few months and is becoming a preferred means of transportation for communities along this route in Delta, Edo and Kogi States”.

He called on the communities where the facilities are sited, to make the best use of them by protecting the critical Federal Government infrastructure from vandalisation.

He added that the project would have a ripple effect on job creation in the country. 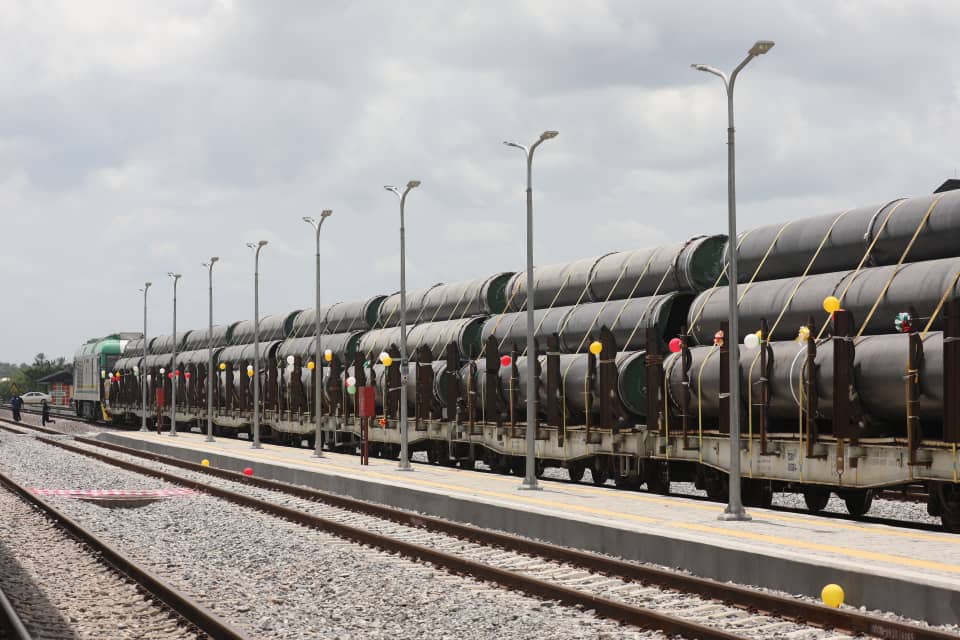 According to Kyari, “Our   choice to of exploring  the rail option for the haulage of AKK  line pipes was propelled by our desire to mitigate  all Identified project and safety risk as low as reasonably practicable(ALARP) while delivering   the project in the right quality and time. moving  line pipes through human  roads  as the only option before the return of tall way infrastructure.

“By this laudable achievement of resuming freight services via railway. NNPC’S global goal on HealthSafety & Environment nicknamed Goal Zero (zero incident and accidents) will be achieved. With special considerations to Safety of people and assets, the rail option has been Identified as a cheaper, safer and fastest means to deliver the line pipes from Nigerian Ports to Project sites In Ajaokuta and Kaduna.

In his goodwill message, the Chairman Joint house committee on land and transport,  Senator Buhari Abdulfatai assured the Minister of the National Assembly’s  avowed commitment towards the realisation  of a functional, nationwide rail network through the instrumentality of appropriation and effective oversight.

Abdulfatai, who was represented by  Istifanus Gyang, senator  representing Plateau North Senatorial District said, “The Senate looks forward to the speedy completion of more rail line arteries. This will relief our roads from heavy duty haulage that shortens the lifespan of our roads. It also provides a cheaper and safer alternative to road transportation.

“It is no doubt a milestone as it is a major step in our quest to have a functional Rail Transportation in Nigeria. It is also significant as it addresses the huge infrastructure deficit confronting the nation, the transportation sector inclusive,” he said.

On his part, the Managing Director NRC Fidet Okhira thanked  the President Muhammadu Buhari for  keeping railway alive through the rehabilitation and modernization of the entire system.

The  event had in attendance, the Permanent Secretary ministry of transportation, Margaret Ajani, Royal fathers, senators and members of the  national assembly, management of NRC among others.