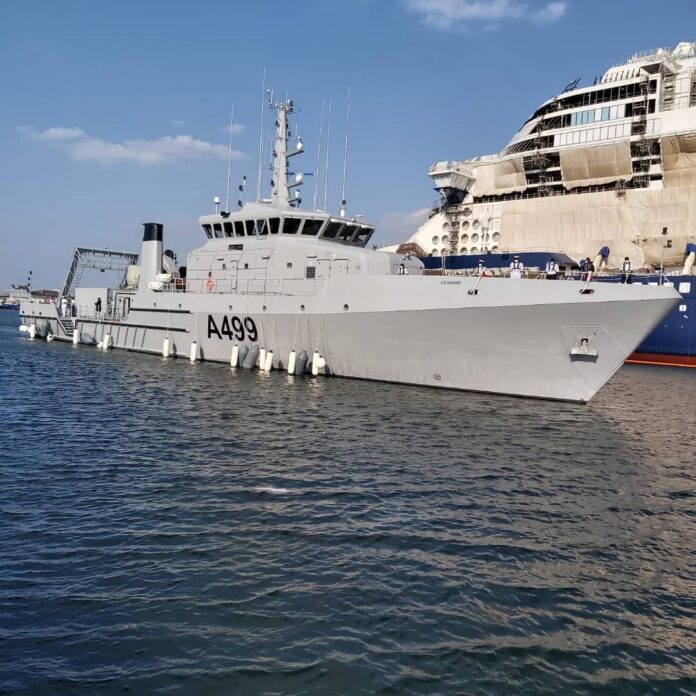 According to the Nigerian Navy’s Director of Information, Commodore Suleiman Dahun, the voyage which began at about 5:13pm Nigerian Time, will include Port visits to Lisbon, Las Palmas, Banjul and Tema-Ghana. The vessel is expected to arrive on 17 May 2021.

TheFact Nigeria had reported that the NN had yesterday taken delivery of its first ever purpose built Offshore Survey Vessel, NNS LANA, in a Flag Transfer ceremony, during which the Minister of Defense, Major General Bashir Magashi (rtd), who was represented by the Chief of the Naval Staff, Vice Admiral Awwal Gambo, had stated that the new vessel was conceived as a replacement to the previous NNS LANA, a survey ship that was decommissioned about 10 years ago.

Addressing the Ship’s Company, Chief of the Naval Staff, CNS, Vice Admiral Awwal Gambo noted that the foremost desire of every littoral state is to have a fleet with the right mix of platforms to meet its operational objectives. Thus, he acknowledged that the homebound voyage of NNS LANA is yet another milestone achievement in Nigerian Navy’s fleet recapitalization efforts.

Admiral Gambo also said that the induction of NNS LANA to Nigerian Navy will enhance the service capacity in the provision of survey services and charting which are crucial to safe navigation for improved maritime security.

The CNS further said that NNS LANA will serve as a force multiplier in Nigerian Navy’s ability to project naval power for enhanced maritime security in the nation’s maritime environment and the Gulf of Guinea. He equally noted with great delight that the acquisition could not have been possible without the support and commitment of the President, Commander-in-Chief of the Federal Republic of Nigeria, President Muhammadu Buhari whose desire is for the Nigerian Navy to have the requisite capability to meet her constitutional mandate for the nation’s economic prosperity.

Additionally, Vice Admiral Gambo commended the entire NNS LANA ship company for their good conduct since their arrival in France recalling that there has not been any adverse report of any sort. He also applauded them for being very cooperative with Messrs OCEA, the French company that constructed the ship, which has been very instrumental to the completion of the project.

Gambo also charged them to maintain the good conduct as they proceed on their homebound voyage, reminding them that the COVID-19 pandemic is still very much around. Consequently, he employed them to adhere to COVID-19 protocols including extant port administrative procedures and guidelines and to avoid any act capable of tarnishing the image of the Nigerian Navy and the nation in particular.

Furthermore, the Navy chief disclosed that NNS LANA was designed with some shipborne training activities,  intended to further broaden their knowledge and sharpen their skills in the handling of the ship and its systems. He therefore enjoined the ship company to take the training seriously and absorb as much as possible, bearing in mind that they have become a potential reference point to subsequent ship’s company.

He equally did not fail to remind them that they must bring to bare the Nigerian Navy core values of professionalism, integrity and teamwork if the nation to maximize the value of the newly acquired ship for the protection of the maritime environment.

In her farewell remarks, Nigerian Ambassador to France, Dr Modupe Irele, commended Messrs OCEA for their impressive craftsmanship in the construction of the hydrographic survey vessel, the process of which has enhanced the cordial relations between Nigeria and France. She added that the ever growing collaboration between Nigerian Navy and Messrs OCEA in the manufacturing of several ships are strong indicators of the increased engagements between Nigeria and France in economic, defence and security cooperation, among other areas.

Irele also commended the Nigerian Navy and Messrs OCEA who, despite the challenging period of dealing with difficulties, disruptions and delays caused by the COVID-19 pandemic, overcame these challenges to complete the construction of NNS LANA, adding that the desire shown by Nigeria and France to strengthen bilateral and multilateral cooperation as well as increase foreign investments in current and new areas is a mutually shared objective by President Muhammadu Buhari and President Emmanuel Macron.

According to the Ambassador, the shared objective has resulted in an increasing level of exchange of visits by both leaders as well as frequent bilateral visits by high level government officials of the two countries.

Ambassador Irele concluded by lauding the efforts of the Nigerian Navy under the leadership of Vice Admiral Awwal Gambo towards ensuring the maintenance of maritime security and hoped that the deployment of NNS LANA will increase the capacity of the Nigerian Navy in promoting foreign trade and commercial activities amongst other things. She equally wished NNS LANA and its crew a safe and healthy passage back home on international waters.