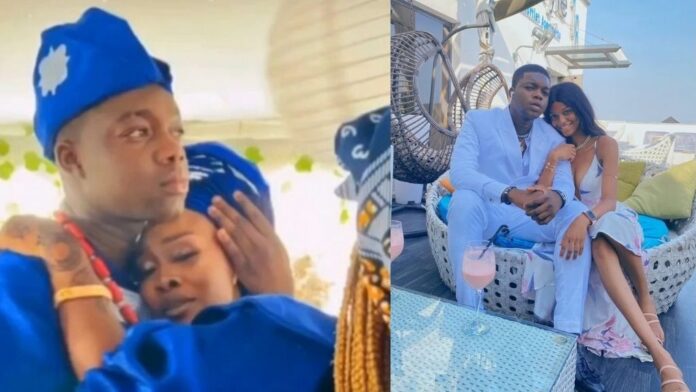 Social media has been buzzing with reactions after the news of the traditional wedding ceremony of content creator, Cute Abiola surfaced online.

Cute Abiola recently got married to his woman in a private traditional ceremony in Ogbomosho, Oyo state on Friday, May 28, 2021.

The news of his wedding left Netizens to wonder what happened between him and social media Influencer, Adeherself due to his publicized romance with her

Although, it appears that the comedian, Cute Abiola and Adeherself may have been ‘stunting for the gram’.

However, in the midst of the reactions, Adeherself sent congratulatory messages to the popular Instagram Comedian and this generated more reactions by social media users who questioned what happened between them.

Following the buzz surrounding his marriage, Adeherself decided to reveal that they were never in a relationship.

She wrote: “lol you guys should calm down now I already said this before that @thecuteabiola and I never dated and we aren’t in a relationship neither am I engaged but because he was mute on it, people felt there was a relationship so you see 4 I and and @thecuteabiola are good friends and still will be congratulations to you Bro @thecuteabiola now people don see say our real bride self no be here o”

Read some comments from social media users below;

sean.adlan: “Brotherly and sisterly love ….no be juju be that ?”

cherish_e_francis: “The lord is your strength ”

pharm_sophist: “All this coverup story, we could see through God is your strength my darling.”

realbass.og: ““Our real bride self no be here o”… In this last sentence lies her hurt and heartbreak , you’ll see it if you’re an emotionally intelligent person.”

Check out photos and videos from Comedian Cute Abiola wedding ceremony below;