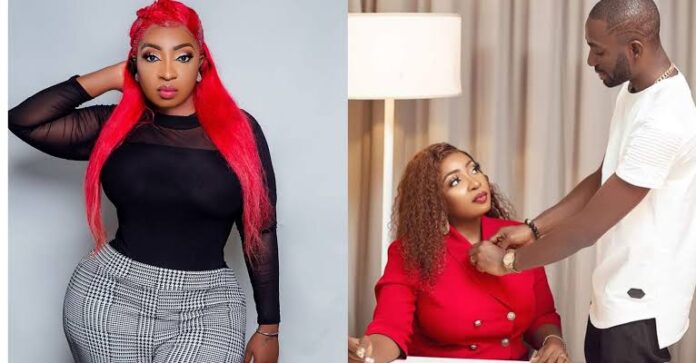 Popular Nollywood Actress, Anita Joseph has replied those who criticized her for not being pregnant after 16 months of marriage.

In response to those who called her out for not being pregnant, Anita Joseph tagged those who put pressure on married celebrities and other individuals to get pregnant, as “Being silly”.

She said:“I am always in high spirits but I have also had to fight some private battles. I don’t even know how to put some of the things I have experienced in words. It is funny that people come to my social media page to ask me why I am not pregnant. People have said many unprintable things and I find them very naughty and silly. People that make those kinds of comments are just low lives. Some would even ask if my husband does not have sperm.”

“However, I handle it well by ignoring them. I believe that if one is well mannered and has proper upbringing, there are some statements one would not make on social media. Words are very sensitive, so I have built an armour around myself. I have always said that marriage is beautiful and I am a testimony to that.”

Speaking about fake friends, the actress said:“Fake friends are everywhere, not just the entertainment industry. Everyone should live their lives the way it suits them. If one is not truthful to oneself, one cannot be truthful to other people.

As a matter of fact, one cannot even be honest with friends if one is not true to oneself. I cannot stand people who are not comfortable with their lives making derogatory comments on my social media page. I can’t stand people with questionable characters attempting to bully, insult and body-shame me when I am better than them in all ramifications.I cannot also stand people who easily spew insults at other people or judge one based on what they heard about one on social media.”

On some of the benefits of marriage, Anita Joseph spills,

“Ever since I got married, I have become more beautiful and glow differently because I have peace. There are a lot of married people who do not have peace in their homes. Money and material possessions may finish but one’s peace is sacrosanct. I have heard people say that if one does not have money, one cannot have peace of mind. But, there are people that have money, yet don’t have peace. I am grateful for my husband.

He is God-sent and we are content with our lives. Some of my friends did not expect me to settle down with a hype man but I am glad I did. Who does not need a hype man in their lives? My heart certainly beats for him.”

‘Why Are Women So Comfortable Slut-Shaming Each Other?’ – Juliet Ibrahim

The Nigerian Communications Commission (NCC) on Wednesday, June 23, 2021 and Thursday, June 24, 2021 marked this year's International Library/Museum Day with the charge...

The Alumni Association of the National Defence College, ANNDEC, has decorated the Chairman of the Economic and Financial Crimes Commission, EFCC, Abdurasheed Bawa, as...

A media organization, Signature TV, has called on the Independent Corrupt Practices and Other Related Offences Commission, ICPC, to probe some staff of the...

The Nigerian Academy of Engineering (NAE), one of the highest professional bodies in the engineering field in the country, has presented an award to...

Nollywood actress, Rita Dominic has revealed that she was silently banned from Nollywood. While speaking in an interview with Chude Jideonwo, the 45-year-old narrated why...