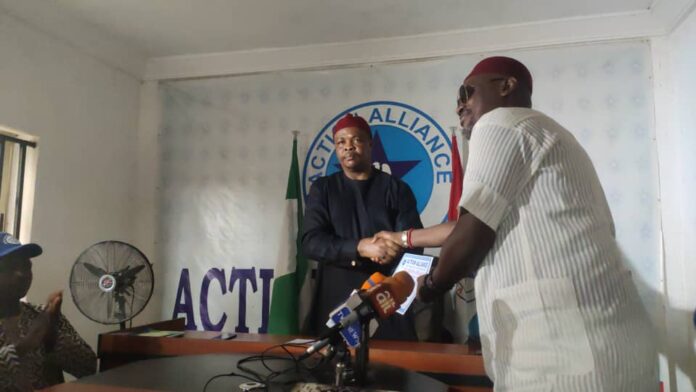 The Action Alliance party on Saturday, presented a certificate of return to Mr. John Ikeotuonye, to fly the party’s flag in the November 6, 2021 governorship election in Anambra State.

Mr. Ikeotuonye emerged the winner of the party’s primaries which held in Awka, Anambra State on Thursday.

He defeated five other aspirants to clinch the party’s ticket for the polls, having won the majority of votes cast.

National Chairman of the Action Alliance, Chief Kenneth Udeze, while presenting the certificate to the candidate, thanked the party’s electoral committee for a job well done.

In his acceptance speech, Mr. Ikeotuonye thanked the party’s Chairman, Chief Udeze, the electoral committee and the electorate for making a good choice by electing him as the candidate.

Ikeotuonye who emphasised that the era of money politics was over, said: “It is time for us to wake up. I want to tell the people of Anambra that we have come to take what belongs to us.

“It is an opportunity for the youth to stand up and make a change, and take over. It is time for everyone to rise. Politics is not all about money although money is involved.

APC Fires Back At Obasanjo Over Failed State Claim

Why We Voted Against e-Transmission Of Election Results- Senate President