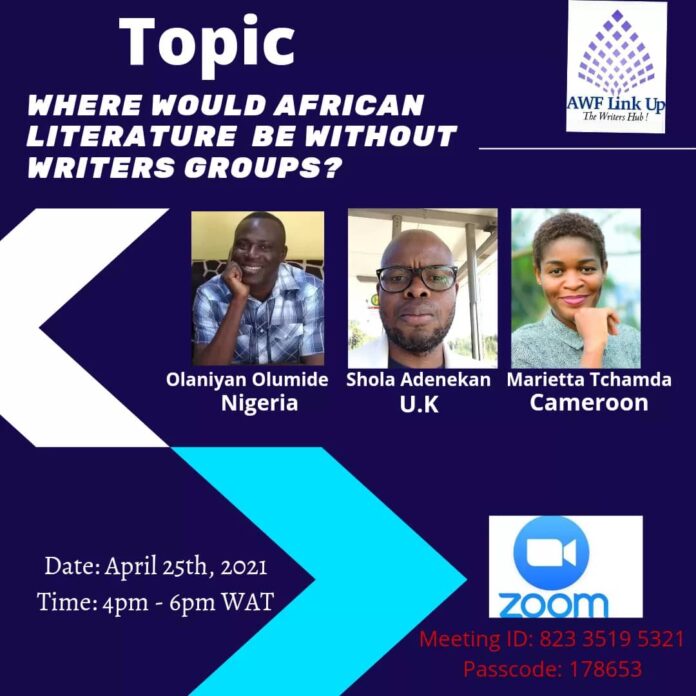 Shola Adenekan, Olaniyan Olumide and Mariette Tchamda will be on the second edition of theAWFLinkUp via Zoom,on April 25, 2021 from 4- 6pm Nigerian Time. The trio will have a conversation on – “Where Would African Literature Be Without Writers’ Groups ?”

This was made known in a statement signed A. D. Dabra, the Publicity Secretary of Abuja Writers Forum.

Adenekan , who will moderate the event, is an Assistant Professor at ASCA. He is also a recipient of a major grant from the European Commission, in which he will be leading a team of researchers – as a Principal Investigator – to study the networks of Yoruba Print Culture.

He has recently been awarded a Visiting Fellowship at the University of Ghana, Accra, by the Council for the Development of Social Science Research in Africa (CODESRIA). His book, “African Literature in the Digital Age”, has just been published by James Currey.

Olaniyan is a poet, satirist, social scientist and historian. He debuted his collection of poems – Lucidity of Absurdity – in March 2017. Selected poems from the work are being used to teach contemporary African literature in some higher institutions in Nigeria. The collection has been reviewed in a number of literary and academic journals, including the Keffi International Journal of Science and Humanities, the BookArtVille magazine and Dugwe – an e-journal.

Olaniyan’s poem, “Behind Closed Doors”, won the maiden edition of Communicators League Creative Writing Contest 2017. A number of his poems, including “Déjà vu”, “Drowning Fish” and “Dire Silence” have been adapted into community dramas and performed in cities across Nigeria. Another poem, “One Sojourn of the Moon”, received an honorary mention in the Mandela Day Poetry Competition 2016.

Some of his short stories and poems have been published in anthologies within and outside Nigeria. He has read at a number literary meetings, including at Abuja Writers Forum’s Guest Writer Sessions and at the 2018 Abuja Literary Festival organised by the AWF. A sequel to Lucidity of Absurdity, another collection of poems is slated for release by June 2021.

Tchamda is a Cameroonian publisher, independent translator and French teacher. She studied English and French Language and literature at Yaoundé I University.

Her journey in publishing started three years ago when she created NUANCES, a publishing house which only publishes books written by women, with women as leading characters.

Her aim with this project is to involve more Cameroonian (and African) women in literature and to desacralize literature in a context where reading and writing are considered as too elitist.

A second book was published in March 2021: “Elles Parlent d’amour “. A collection of three novellas by three different authors.