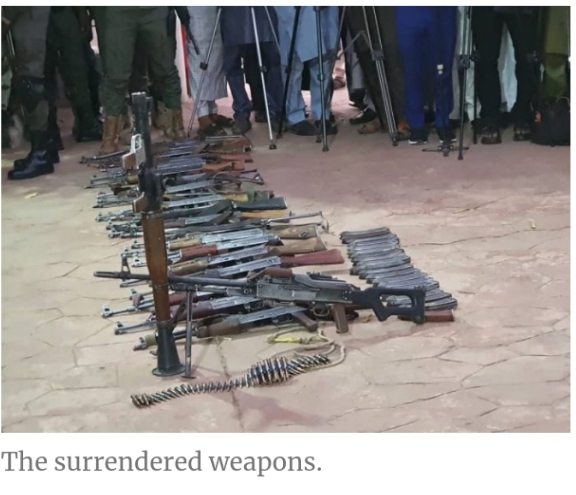 Leader of a notorious bandit gang, Auwalu Daudawa, along with six other members, have surrendered over 26 high calibre weapons 21 of which are AK47 riffles, one RPG and four other dangerous weapons to Governor of Zamfara State, Alhaji Bello Muhammed Matawalle.

The bandits declared their repentance from banditry and hooliganism before Governor Matawalle and security agencies in Gusau, the Zamfara State capital, Monday.

In a brief ceremony at the Government House Gusau, Daudawa handed over the weapons  along with himself and six of his gang members, swearing with the Holy Qur’an never to engage in banditry ever again. Governor Mutawalle, in turn, handed the weapons over to the state police command.

TheFact Nigeria noted that Auwalu Daudawa was not surrendering his weapon out of fear but out of the conviction that Governor Matawalle is sincere in his peace initiative.

He said he had no more desire for life in the bush, and appealed that he should be allowed to stay in Gusau for education purposes, while asking for pardon and forgiveness from the society.

Receiving the repentant bandits, Governor Matawalle commended the courage of Daudawa for embracing the peace initiative of the state government, promising his admistration’s commitment to honouring and fulfilling all the terms of agreement leading to the peace deal, adding that he would continue to woo others in the bush until there were no more bandits left in the state.

Matawalle also lauded the Council of Ulama and residents of the state for supporting the peace initiative.

“We thank Daudawa and his members for their repentance and implore them to join hands with the state government in convincing others to also repent,” the governor said.

He also urged other unrepentant bandit groups in the state to subscribe to the peace initiative in the state.

“Today, we have more than 20 AK-47 released by the former bandits. This is very commendable.

“I call on people of the state to pray for Daudawa and his team so that he can maintain his oath.

“We should give them benefit of the doubt as we are going to provide them with accommodation in the town,” he said.

He assured that, with the cooperation of all, the former bandits would get assistance to improve their livelihood in the town.