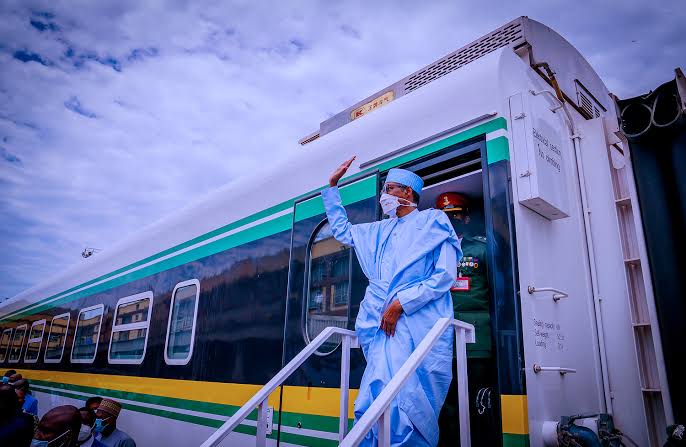 In continuation of his administration’s revolution in the transportation sector, President Muhammadu Buhari, performed the ground breaking for the Kaduna – Kano Railway Modernisation Project.

The ground breaking, which was done at the proposed site of the Kano Railway station, On Thursday, adjacent to the Dala Inland Dry Port in Kano, is just a segment of the much-anticipated Lagos – Kano critical corridor.

President Buhari, who expressed delight over the development, said it was indicative of the commitment of his Administration to the revival of Nigerian Railway system, “to reduce the deficiency in our transportation infrastructure and drive effective and more efficient transportation of passengers and freight within the country”.

According to him: “The ground breaking ceremony for Kano – Kaduna segment of the Lagos – Kano railway modernization project signifies an important milestone of the construction of the third segment, having completed and commenced commercial operation on the first segment Abuja – Kaduna and recently the second segment Lagos – Ibadan”.

The project, he added, “is crucial to the establishment of a supply chain in railway transport within its corridor, Kano – Kaduna – Abuja, as it links the majorcommercial cities of Kano and Kaduna to the Federal Capital Territory, Abuja.

“Upon completion, Kaduna – Kano railway project is to link the Lagos – Ibadan Railway project via Abuja, Minna, Ilorin, Oshogbo, Ibadan to Lagos on one end, and Maradi, Niger Republic on the other.

“This railway connection when completed will establish the ports in Lagos, as the choice for import and export business of the people of landlocked Niger Republic. This would positively drive our economies through employment from new business opportunities and wealth creation”.

This was as he assured that: “The Federal Ministry of Transportation and Ministry of Finance are working to engage co-financiers to conclude financial agreements to partner with the Federal Government for the development of the Ibadan – Kano line and to further increase the bankability of the project.

“The railway line will be linked to the second Port in Lagos, the Tin Can Island Port. It is also expected that the Inland Dry Port on these routes will be activated and the ports can now receive imports directly from the international market as ports of destination such as the Ibadan, Kaduna and Kano Inland Dry Ports”.

In his welcome remarks, the minister of transportation, Rotimi Amaechi, recalled that the first segment of the corridor – Abuja/Kaduna Railway line, was flagged-off for commercial operation in July, 2016.

He explained thus: “The scope of the railway project involves a 203km double track standard gauge railway from Kano to Kaduna. The railway along this route traverses the major cities of Kaduna, Zaria and Kano with three (3) railway stations both for passenger and freight services at Rigachukun, Zaria and Kano with varying capacities and categories.

“This project will link the Federal Capital, Abuja with the Commercial city of Kano and also link the ongoing Kano – Maradi project. The outstanding addendum, Ibadan – Abuja, will link the Sea Ports in Lagos to Maradi, Niger Republic. This I believe will greatly boost trade between the two countries and foster economic development. This railway line, will present an opportunity for Nigerians to traverse between Abuja and Kano via Kaduna with relative ease.

“The project will no doubt improve the standard of living of citizens within its corridor, create employment and promote trade. In the long term the railway will help decongest the Lagos Port Complex and increase its efficiency as well as further increase the viability of the Inland Dry Ports located in Ibadan, Kaduna and Kano.

2023 Elections: No Automatic Ticket For Jonathan, Others- APC