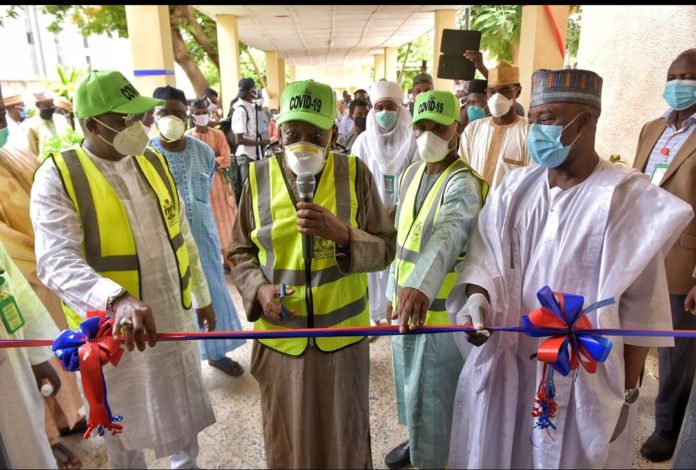 A coalition of private sector leaders, under the umbrella of Coalition Against COVID-19(CACOVID) which was formed in the wake of COVID-19 in Nigeria, with the aim of providing support and complementing the efforts of Nigerian Governments at different level to combat the COVID-19 crisis in the country has officially handed over a renovated and remodeled Abubakar Imam isolation center to Kano state government.

Speaking during the handing over ceremony , representative of CACOVID, Alhaji Abdulkadir Sidi revealed that, the coalition has spent over N200 million in uplifting the standard of the 66 beds facility to a modern standard.

Alhaji Sidi added that, the coalition had provided equipment needed at a world standard isolation center in addition to repainting of the inner and outer spaces of the facility as well as provision of air-conditioning in all the rooms.

According to the representative this is in addition to the newly established 300 beds isolation center at Sani Abacha Stadium which will soon be handed over to the state government as well.

” The coalition has spent over N200 million in renovating, remodeling and equipping the Abubakar Imam Isolation centre in Kano which is dilapidated, as part of the CACOVID complementing efforts of the Nigerian Governments at different level to combat the COVID-19 crisis in Kano state and the country at large,” said Sidi.

He further stressed that, the effort was a total renovation of the facility to enable it serve the purpose of isolating COVD-19 patients in the state.

The center according to Sidi has sporting facilities and a modern common room for the patient’s use.

Similarly, receiving the renovated and remodeled isolation center Kano state Governor Dr Abdullahi Umar Ganduje revealed that, the state government lack words to express how grateful the government is to CACOViD and Aliko Dangote According to him the state is indeed indebted to Dangote for always being their for Na no people.

“Surely, CACOViD has positively assisted Kano state in the fight against the spread of COVID-19. Also Aliko Dangote, who was there for us when we need improvement in the testing of the virus by providing a mobile testing facility, he was there for us when needed ambulance and other logistics, and now this remodeled isolation center. Truly, we lack worst day thank you to Dangote and CACOViD,” said Ganduje.

The government further gave the assurance that it will put the centre to use immediately.