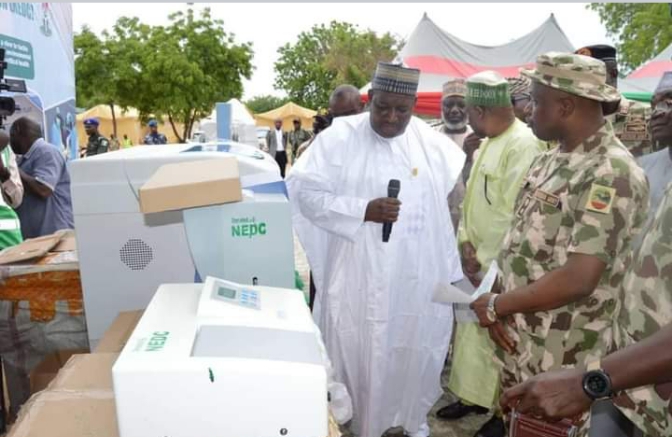 A statement put out by the Army Wednesday, 20 July, 2022, says that the NEDC’s donation of the equipment was made as part of its effort and commitment to realize its mandate in line with her health intervention programs.

TheFact Daily gathers that equipment were handed over to the Division by the Minister of Humanitarian Affairs, Disaster Management and Social Development, Sadiya Umar Faruk, who was represented at the occasion by the Permanent Secretary of the Ministry, Nasir Sani.

In her remarks, the Minister said the reason for the occasion is to contribute to the medical needs of the Nigerian Military Hospital in the Theatre of Operation HADIN KAI (OPHK) to meet the contemporary medical exigencies associated with the current situation at hand, noting that is very important and as a people to show appreciation to the enormous selfless sacrifices of the Nigerian Army and all troops for saving the nation as well as reshaping it.

While presenting the equipment, which include Electrolyte Analyser, Full Auto Chemistry Analyser, Spectrometer, Vorterx Mixer and Haematology machine among others, the Managing Director of the Commission, Mohammed Goni Alkali, said the gesture is geared towards realizing its intervention and rehabilitation programmes with a view to tackling and alleviating the menace of poverty, illiteracy, ecological and other related environmental as well as developmental challenges in the North East.

During the occasion, the Theatre Commander Joint Task Force North East (OPHK), Major General Christopher G Musa, expressed appreciation for the efforts of the Commission, saying the donation will further boost the morale of the troops in the fight against insurgency and also enhance the proficiency of the medical personnel that will use the equipment.

In the same vein, the General Officer Commanding (GOC), 7 Division and Commander Sector 1 OPHK, Major General W Shaibu, said the Division has been the linchpin in the fight against insurgents using both the kinetic and non-kinetic approach.

“I want to sincerely appreciate the NEDC for this kind gesture and I use this medium to express our heartfelt appreciation to the leadership and staff of the Commission for this show of love and concern for the Nigerian military.

Earlier in his welcome remarks, the Commander 7 Division Medical Services and Hospital, Lieutenant Colonel Adeniyi Ogunsaki said the 7 Division Medical Services and hospital founded 9 years ago shortly after the birth of 7 Division Nigerian Army to serve as a field hospital and referral centre for the Wounded in Action troops of JTF (NE) OPHK across sector 1, 2 and 3, has recorded tremendous achievements and facelift through the magnanimity of the GOC. He therefore assured that the equipment donated will be put to maximum use and will enhance the overall performances of the medical personnel in the hospital.

Climax of the occasion were a visit by the Special Guest of Honour and other dignitaries to the Wounded in Action troops, a tour of the ongoing projects of new Women and Children Complex, donation of the equipment to the Division as well as group photographs.

It will be recalled that the Command of Sector 3, Operation HADIN KAI, of the Multinational Joint Task Force, MNJTF, had on 12 July, taken delivery of some African Union (AU) donated equipment and logistics from the Force Commander (FC), MNJTF. The equipment included military trucks, water tankers, super mobile generators, anti-riot APCs, improvised explosive device equipments, tents, as well as information and office equipment.