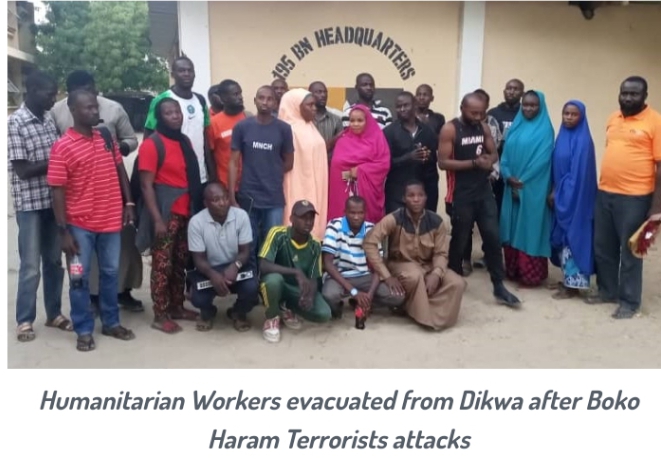 Nigerian troops have rescued 26 humanitarian workers and moved them to Maiduguri, having dislodged Boko Haram Terrorists from the contested but strategic town.

The humanitarian staff working with international agencies including United Nations, were escorted to the Borno State capital, by troops of 7 Division Delta Force, together with 195 and 112 Battalions.

TheFact Nigeria had reported that the troops had earlier foiled an attempt by Boko Haram terrorists to infiltrate Dikwa town in the last few days. The insurgents had stormed the town on several gun trucks, determined to takeover and declare it one of their caliphates.

However, a military intelligence officer disclosed that the timely deployment of army troops by GOC of the Division, General Abdul Khalifa and the active aerial operation by the Nigerian Airforce (NAF) prevented the terrorists from achieving their ‘sinister objective’.

Checks indicate that a search and rescue operation conducted by troops led to the rescue of the humanitarian workers, who were trapped in their building in Dikwa.

The rescued humanitaruan workers, which include 20 males and six females, have been handed over to their officials in Maiduguri.