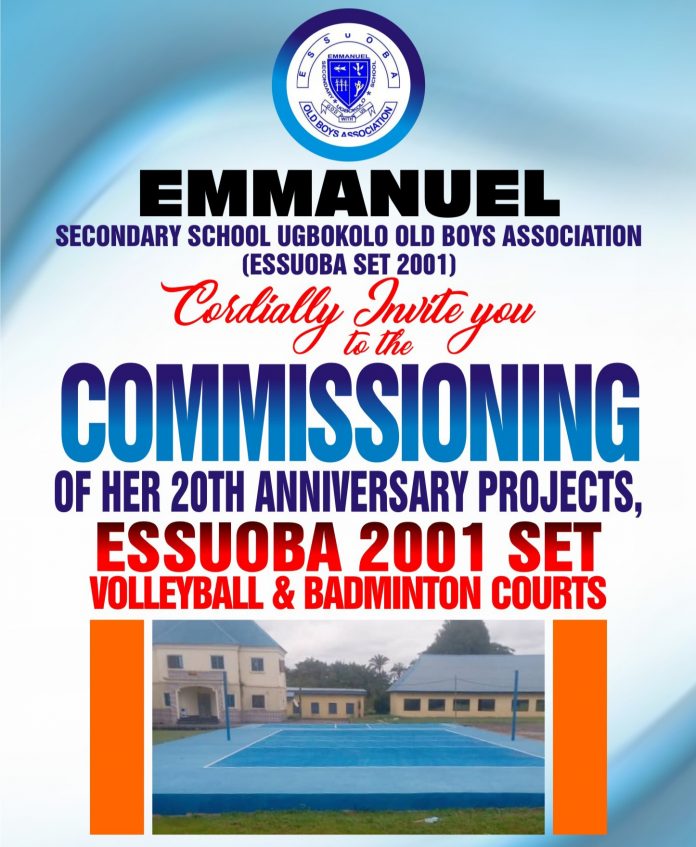 The Association announced that the commissioning of the projects would be part of activities scheduled to celebrate 20 years of graduation from the school.

TheFact Nigeria gathered that Emmanuel Secondary School, Ugbokolo is an all boys secondary school established in the year 1967 under the Catholic Education Services, Otukpo Diocese.

The school was founded by the Catholic Church to bridge the education gap in Okpokwu Local Government area of Benue State.

The school has produced great leaders: Minister, Senator and others for the country, not only of idoma extraction.

Speaking exclusively to TheFact Nigeria, the Anniversary Project Committee Chairman, Mr Nicholas Edego said, all was set for the commissioning of the projects in October 2, 2021.

Mr. Edego noted that, the initiative to construct the project was birthed by the current Executives, during its Annual General Meeting (AGM) in December 2020 with the unanimous approval of the general house.

He explicated that, “after due consultations amongst excos and members of the set, a nine man 20th anniversary project/celebration committee was formed on the 16th December 2020.

“The committee after her inauguration, discussed with the then ESSU Principal, Rev. Fr Idoko Boniface (PhD) to ascertain projects of interest to the school community, chose to build a volleyball/badminton as our key anniversary project.

“During our 2020 AGM of December 27th 2020 held at club 4 & resort Ugbokolo, it was agreed that each members should contribute at least N15,000 towards the projects. Members responded positively since then and we were able to generate the funds required to execute the projects.

“Members of the committee visited the ESSU Principal on Friday 26th , February 2021 at 11am in his office and notified him of our readiness to commence the projects, he welcomed us and assured us of his maximum cooperation/assistance.

“The subcommittee on project implementation and execution was mobilized on 18th , March 2021 with the approval and the actual work commenced on the site on 19th March, 2021.

“The project experience a financial challenge and work was put on hold for about three months after the disbarment of these initial fund to enable members to make more donations.

“The task of project implementation/execution was later transferred to the ESSU principal who successfully supervised and completed the project on 15th Sept. 2021 on our behalf, given the needed fund by us.

“We desire to celebrate and commission the project on the 2nd October, 2021. We also seek the support of the ESSUOBA Excos and exteem members to make the commissioning a success”, he said.