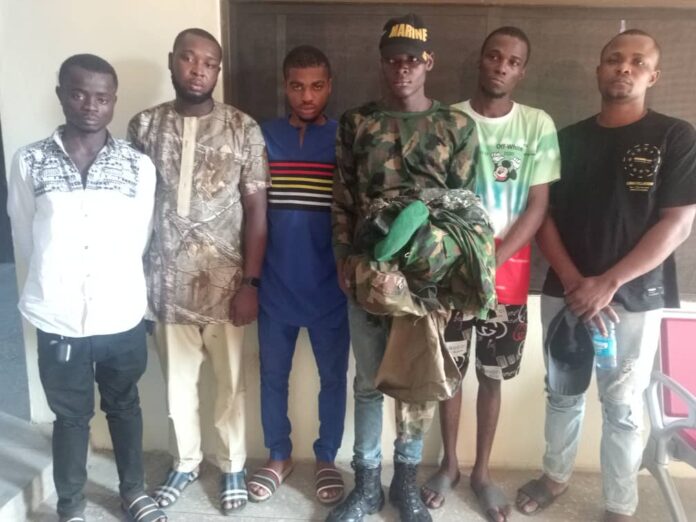 No fewer than six suspected Army impostors have been arrested in Delta State by troops of Operation Delta Hawk (OPDH).

According to a statement issued earlier today by the Director, Army Public Relations, Brig. Gen. Mohammed Yerima, the arrest, made on Tuesday, 23 February, took place along Midwifery School Road in Okpanam general area of Asaba, the Delta state capital, and was made possible due to intelligence reports made available to the troops.

During the arrest, 1 Mercedes Benz GL350, 1 Toyota Corolla with registration number ABJ 49 AA ABUJA, 1 Fabric Nationale bayonet and pairs of military kits were recovered from one of the suspects, Mr Chidera, who claimed to be a Cadet from Southern Maritime Academy at Ugheli, Delta state. The suspect confessed to have gotten the Military kits from one Mr Hassan, nicknamed Commander.

Meanwhile the suspects have been handed over to 63 Brigade Military Police Group for further investigation and prosecution.

Following this incident the Brigade urges the general public and law abiding citizens of the state to be weary of such people who parade themselves as military personnel and to report any suspicious person(s) to any nearest military formation or security agency.