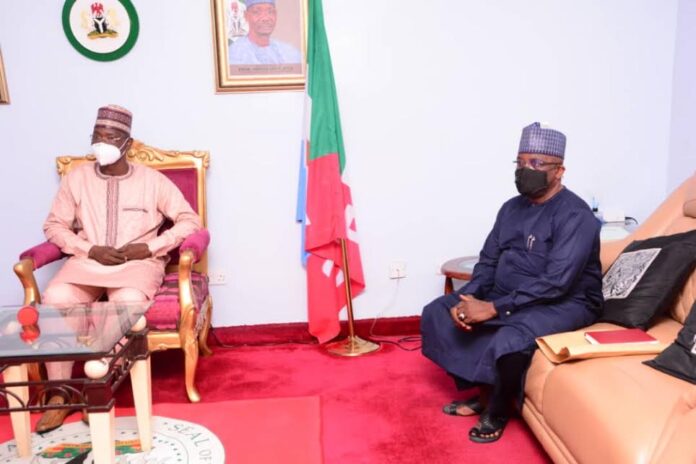 As the Federal Government commences payment of compensation to beneficiaries affected by the ongoing dualization of the Keffi/Makurdi expressway, Nasarawa State governor, Engineer Abdullahi Sule, has outlined modalities for a transparent exercise.

Engr. Sule outlined the modalities while hosting the FG’s compensation team, led by Ishaq Muhammad, a director with the Federal Ministry of Works, at the Government House, on Monday.

The governor specifically directed that payment to the beneficiaries be made through cheques and not direct cash, stressing that, this will ensure transparency in the exercise.

Engineer Sule added that Nasarawa State prefers the team to handle the compensation money, write out the cheques, while the state government hands over the cheques to the beneficiaries.

“I don’t want any penny to come to Nasarawa State, let it go directly to the beneficiaries, because at the end of the day, what we want is development,” he stated.

The governor however appealed to the people of the state, who stand to benefit from the disbursement, to agree to accept what the FG has agreed to pay as compensation, as according to him, the people will be the greatest beneficiaries of the dualization project.

Engineer Sule disclosed that, the state government, on its part, will appoint four persons, including a former permanent secretary from the state ministry of works, who was previously involved in the initial process leading to the compensation, the state Liaison Officer in Abuja, Hon. Philip Mainguwa, a representative of the state ministry for lands, as well as a community leader, who will identify the rightful beneficiaries.

While appreciating President Muhammadu Buhari, for accepting to pay the compensation, the governor, urged the team to pay compensation to all the beneficiaries, as failure to do so, even if it’s for a tree, may end up obstructing the timely completion of the project.

Engineer Sule advised the FG’s team to commence the payment of the compensation in phases, starting with the Keffi/Akwanga axis, which will also serve as a testing ground for the payment process.

Earlier, leader of the FG’s compensation team, Ishaq Muhammad said they were at the Government House, to seek the advice of the governor to inform him that the FG has commenced the process of paying compensation to persons affected by the ongoing dualization project on the Keffi/Makurdi expressway.

Muhammad, who is a director/unit manager, road sector development team, at the Federal Ministry of Works, said they were also in Lafia, to seek the help of the governor on the modalities for the disbursement of the funds to the beneficiaries.

He disclosed that the project, started in 2017, is presently at 40 percent completion and is expected to be completed within three years.

Muhammad said the compensation became necessary because existing utilities will be relocated, as well as payment of compensation to affected persons along the project route.

The dualization of the Keffi/Makurdi road, according to the official, involves the construction of a new carriageway and rehabilitation of the existing highway, with new bridges constructed, with elongation of existing culverts.