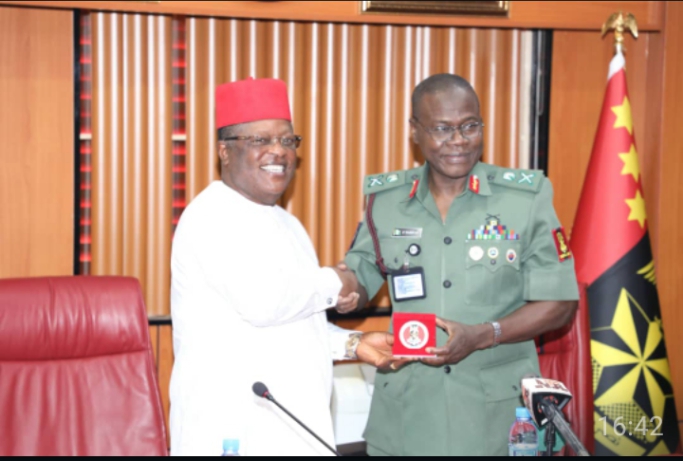 The Executive Governor of Ebonyi State, Engr David Nwabueze Umahi has congratulated the Chief of Army Staff, COAS, Major General Faruk Yahaya on his appointment as the 22nd COAS in the annals of the Nigerian Army (NA) history.

Governor Umahi, who made the remarks when he paid a courtesy call on the Army Chief at the Army Headquarters earlier today, described the COAS as a detribalized Nigerian and called for support for the NA.

The governor stated that the nation was passing through a challenging moment that required the maximum support of stakeholders to the security agencies.

He warned Nigerians against playing politics with the security of the nation, and applauded President Muhammadu Buhari for appointing Major General Faruk Yahaya to lead the Army to greatness.

Governor Umahi further noted the pedigree of the COAS whom he said is a detribalized Nigerian, a professional and an intelligent officer whose services are needed to secure the country at a time sponsors of hate speeches are unmindful of our collective national interest.

He reassured the COAS of the support of the people and government of Ebonyi State in the task of securing the nation.

He also reiterated that constant cooperation and assistance of the NA and other security agencies will consolidate on the relative peace enjoyed in Ebonyi state and the nation at large.

“We must stand united and support the NA in all their activities”, he said while paying tributes to the late COAS, Lt Gen Ibrahim Attahiru and other fallen heroes.

In his remarks, Army Chief, Yahaya, thanked the Governor for the kind gesture displayed in condoling with the NA over the demise of the late COAS, and stated that the NA and Ebonyi State have a long standing relationship that must be sustained for mutual benefits.

He observed that Ebonyi State under Governor Umahi has provided the much needed enabling environment for the NA to discharge its constitutional roles.

The COAS reassured the Governor that the NA will not relent in its efforts in maintaining peace in Ebonyi and other states in the region. He urged the governor to use his position as Chairman, South East Governors Forum to promote peace in the region.