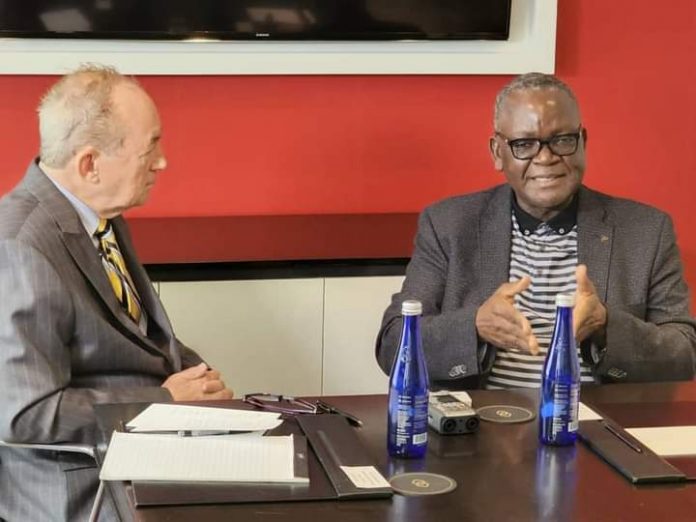 Benue State Governor, Samuel Ortom has alleged that the Fulani herdsmen militia have been operating in collaboration with other terrorist groups to sustain their attacks on the state and other parts of the country.

Ortom’s Chief Press Secretary, Nathaniel Ikyur in a statement said, the Ortom made the revelation in an interview with Epoc Times TV in Washington, DC, United States of America with Douglas Burton as host.

The Governor, according to the statement, pointed out that from the information available to him, Boko Haram, ISIS, ISWAP and armed Fulani herdsmen were working for one agenda, emphasising that they were the same group of people operating under different names.

Governor Ortom maintained that the enactment of the Open Grazing Prohibition and Ranches Establishment Law of the State was his administration’s way of finding a solution to the lingering issue which he noted has now exposed the agenda of the Fulani herdsmen to be beyond grazing of cattle.

The Governor further dispelled the twisted narrative that it was a farmer/herder crisis ongoing in Benue State, insisting that the attacks were unprovoked and coordinated killings by the armed invaders.

“Most of the people who are killed, and whose homes are destroyed are farmers. The insurgents coming for this Jihadists go to attack villagers, not really in the urban areas. So farmers live in the rural areas to engage in their farming activities.

“I must say that whatever you hear in America here about what is happening in Nigeria, some people have the narrative that it is farmer-herder crisis. It is not so. It is a dummy that has been sold to shield people away from knowing the truth.

“The truth is that you know in America here, in Europe, in Asia and other parts of the world, people go into animal husbandry through ranching.

“I did a study and I confirmed this in several countries with the statistics where more countries have more livestock than Nigeria, yet there are no crises.”

He further maintained that the security agencies were doing their best to curb the attacks but regretted that such efforts were not enough, saying that such outfits don’t have the manpower to be stationed in the flashpoints to wade off the attackers.

The Governor insisted that, if the Federal Government has no hidden agenda, they should convoke a national security summit where all stakeholders would be given the opportunity to proffer solutions to the security problems.

The Governor also expressed worry that his request to the President to grant approval to procure automatic weapons for the newly established Community Volunteer Guards to enable the security outfit match the strength of Fulani herdsmen terrorizing the state is yet to get a response from the presidency.