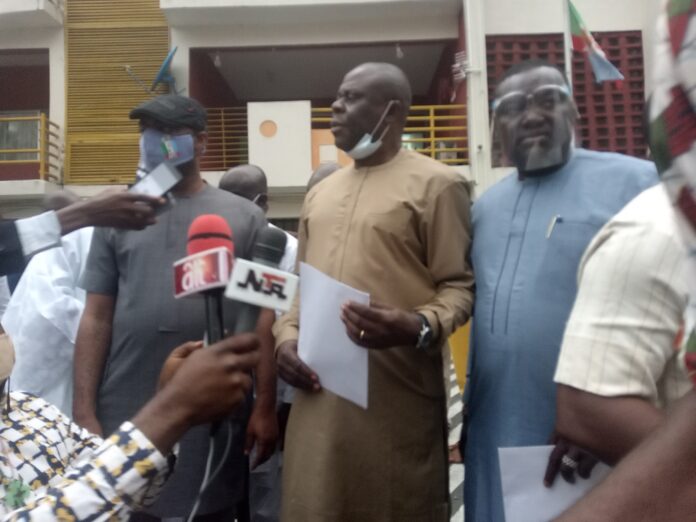 The Imo North Senatorial Screening Committee of the All Progressive Congress (APC) have vehemently rejected Hon. Ifeanyi Ibezim as the winner of the Senatorial by-election conducted last Thursday, claiming that he was not cleared at screening level and therefore was not eligible to contest the primary as he has already been disqualified.

Addressing the Newsmen on Monday at the APC National Secretariat in Abuja, the screening committee led by the Chairman Hon. Lawrence Chuku, claimed that Frank Ibezim was among the 6 candidates screened out based on failure to meet the requirements and academic qualifications.

The Chairman flanked by the Secretary Hon. Jonathan Modi and other members further stated that the committee noticed that their report which cleared 5 aspirants and left 6 not cleared was totally ignored, thereby allowing all the aspirants both cleared and non to run for the Senatorial Primaries.

In his statement, he said: “Unfortunately, with utmost dismay, we noticed that Our
report which cleared 5 aspirants and have six not Cleared for very cogent and verifiable reasons were jettisoned. Both the aspirants cleared and not cleared were allowed to run for the Senatorial Primaries, embarrassingly, one of the aspirants not cleared is being touted as having emerged as one of the winners of the said controversial primary election.
For record purposes, the eleven Senatorial Aspirants Screened were;

Six (6) other aspirants were disqualified for not meeting
the basic requirements and they are:

Quoting section 3(f) of the guidelines for the nomination of candidates, Chuku stipulated that ONLY aspirants fully cleared by the party shall be eligible to stand election at the Party’s primaries.

He therefore went ahead to declare that “Mr. Frank lbezim who is purported to be one of the possible flag bearers of our party was not cleared to contest the Imo North Senatorial primary elections based on the following grouds:

He did not submit any originals of his educational qualification certificates or properly certified true copies for citing.

He presented a statutory declaration of age deposed
to by one Emmanuel lbezim, who happens to be his elder brother. The statutory age declaration was not signed by the declarant, which rendered the document invalid.

He submitted another affidavit stating the loss of his not academic qualification and certificates which was not
signed by the deponent, this also rendered the the document invalid.

Mr. Frank lbezim submitted the photocopies of his academic certificates which he said were missing namely: WAEC CERTIFICATE, UNIVERSITY DEGREE, AND NYSC CERTIFICATE, amongst others.