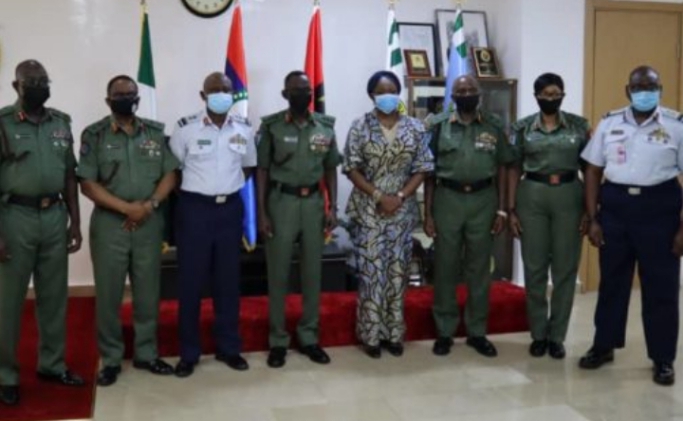 The Chairman/Chief Executive Officer, Nigerians in Diaspora Commission NiDCOM, Abike Dabiri-Erewa has solicited a partnership between NiDCOM and the Defence Headquarters DHQ towards hosting its forthcoming Diaspora conference on national security.

The NiDCOM boss made this known, when she visited the Chief of Defence Staff CDS, General Lucky Irabor at the DHQ complex, Abuja.

Dabiri-Erewa stated that Nigerians abroad working in the defence and security sector intend to leverage on the conference in order to contribute their quota in addressing the security challenges currently bedevilling the nation.

The CEO observed that Nigerians abroad working in the defence and security sector are excelling, adding that the conference will be provide a platform for a roundtable discussion where they intend to share their expertise with the Armed Forces of Nigeria AFN and other stakeholders in the security sector.

She added that the AFN could also use the platform to showcase its operational successes, while sensitizing Nigerians home and abroad on issues that border on Nigeria’s security.

She further disclosed that the DHQ could collaborate with these security experts in training military personnel and provision of logistics support for the Services.

Dabiri-Erewa eulogized the AFN, which she said has continued to receive encomiums for its participation and exploits in peace support operations across the globe. She also commended the AFN for promoting gender inclusiveness and advocated for more enlistment of women into the military profession.

In his response, the CDS, Gen Lucky Irabor, affirmed that the DHQ is ready to partner with the Commission and Nigerians in the Diaspora to add value to the national security disposition, noting that the proposed conference is a meeting of like-minds as conversations across the borders will be useful at this critical stage.

The Defence Chief, further added that the conference was timely and apt, considering the ongoing reforms in the AFN occasioned by the recent change within its leadership hierarchy.

On promoting gender equity, Gen Irabor maintained that the military will continue to promote and prioritize female personnel’s active involvement in its operations, administration and other activities.

He further explained that the AFN could boast of female senior officers, both serving and retired, as some were able to reach the zenith of their career becoming two star Generals.