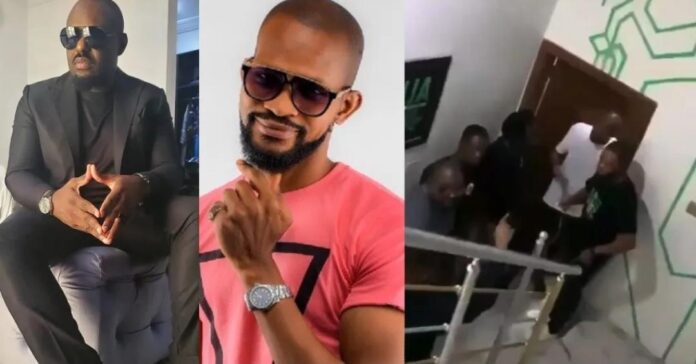 Veteran Nollywood actor, Jim Iyke, has been seen in a viral video beating up a controversial actor, Uche Maduagwu.

The fist fight was triggered by Uche Maduagwu claims about Jim Iyke.

Uche via his Instagram page shared a video questioning the thespian’s source of wealth. He said, Jim Iyke “mysterious supply of wealth” attributes him to being a “ritualist”.

Uche also called out billionaire businessman, Obi Cubana and Hushpuppi and said law officials will eventually catch up with Jim Iyke and Obi Cubana just like they did with Hushpuppi.

In a recent twist, a viral video showed Jim Iyke confronting Uche with a couple of people. During the course of the confrontation, things got heated and Jim Iyke introduced his fists to Uche’s face.

In the video, Uche asked Jim “how did you know that I’m here?” Jim responded rhetorically before Uche said “EFCC will carry you, you know they’re looking for you?”

However, he was restrained to prevent him from Assaulting Uche further.

Uche is later heard saying he’ll sue Jim Iyke and this led to him receiving more punches from Jim Iyke.