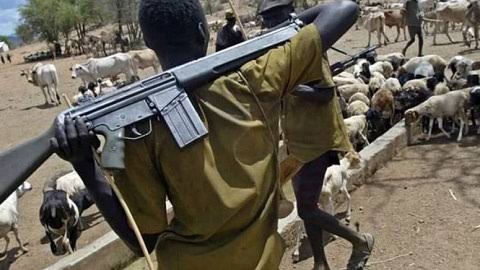 No less than eleven persons have reportedly lost their lives at the hands of suspected armed herdsmen, who attacked Igama community of Edumoga Ehaje district in Okpokwu Local Government Area of Benue State.

Locals said the terrorists besieged the community at about 4am, Sunday 12 June, and opened fire on the villagers. They also reportedly set several buildings in the vicinity on fire.

TheFact Nigeria gathers from the Chairman of Okpokwu LGA, Amina Audu, that three corpses were received at Okpoga, the local government headquarters, while another six corpses were being brought from Igama, one of the affected villages.

Audu further disclosed that the victims were all youths while the elderly and women were allowed to escape.

“I’m right now at the Police station in Okpoga awaiting the corpses. Soldiers and other security men are here with me,” she said.

Police Public Relations Officer for the Benue State Command, Deputy Superintendent of Police, Sewuese Anene, confirmed the attack to journalists but did not give intricate details regarding the attack, neither was there a confirmation of the death toll.

“Information about the attack was received and more officers sent to assist Okpokwu Division in managing this. I am yet to receive details”, Anene’s statement read in part.

“Growing up in Utonkon District of Ado LGA, I knew Igama in Ojigo Ward of Okpokwu LGA as one of the most peaceful communities in Benue South until recently when terrorists turned it to a cesspool of blood”, the lawmaker bemoaned the situation.

“I therefore condemn the killing of 30 innocent people, and still counting. I have contacted security agents who have responded appropriately”, the parliamentarian disclosed.

TheFact Nigeria notes that this latest incident adds to the climate of insecurity currently pervading the country. It comes just a few hours after bandits abducted no fewer than 50 wedding guests travelling along the Sokoto-Zamfara road.

Those abducted include telephone marketers at the popular Bebeji Plaza in Gusau.

They were said to be returning to Gusau after attending a wedding of their colleague in Sokoto State when the incident happened between Tureta-Bakura road around 6 pm on Saturday.

Secretary of Union of Communication, Zamfara State, Ashiru Zurmi, while narrating the incident to journalists in Gusau on Sunday, said one of the vehicles conveying the guests developed a fault at Tureta in Sokoto State and it was fixed by an automobile mechanic after about 40 minutes.

He said the bandits ambushed the vehicles after the repair of the faulty vehicle along Tureta-Bakura road, and abducted over 50 persons.

Zurmi noted that more than 20 persons later managed to escape, some of whom sustained various degrees of injuries.

CAN Congratulates Okonjo-Iweala Over WTO Appointment