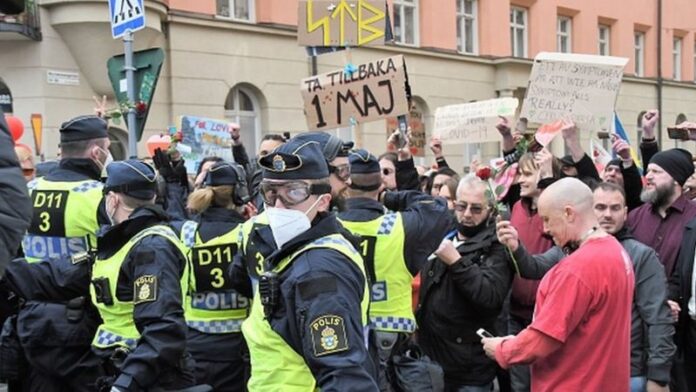 Turkish police have arrested more than 200 people for holding unauthorised protests on May Day, which has seen rallies across the world despite the continued spread of Covid-19.

The protesters in Turkey’s largest city, Istanbul, were caught breaching restrictions imposed to curb a third wave of coronavirus.

Marches led by workers and unions are held on 1 May every year as part of International Labour Day celebrations in many countries.

This year, the rallies took place once again against the backdrop of a pandemic that has destroyed livelihoods and upended economies worldwide.

In many countries, police were deployed in large numbers to deal with possible disorder and ensure coronavirus restrictions were observed.

Scaled-back rallies were held in Germany, Russia, Spain, Sweden, the UK, the Philippines, Indonesia and many other countries. Most demonstrations were peaceful.

But Turkey was among several countries where police were embroiled in May Day protests that turned violent on Saturday.

The office of Istanbul’s governor said 212 people had been arrested after they broke away from marches and tried to enter Taksim Square, a symbolic area of protest.

Pictures showed chaotic scenes in which police used their shields to push back crowds and dragged some protesters away from the square.

The country went into its first full pandemic lockdown earlier this week, in a bid to curb a surge in infections and deaths.

In France, at least 34 people were arrested in the capital, Paris, after some marchers threw objects and clashed with riot police.

Bbc.com reports that about 300 rallies were organised in Paris and other cities, including Lyon, Nantes, Lille and Toulouse.

The protesters voiced their opposition to government plans to change unemployment benefits and demanded economic justice.

Similar demands were heard in Germany, where May Day protests were held nationwide despite the introduction of tougher Covid-19 rules last week.

In the capital Berlin, thousands of police were deployed to monitor multiple demonstrations, including one organised by a group that opposes the government’s coronavirus strategy.

Coronavirus was on the agenda in Indonesia as well.

At one rally, protesters in the capital of Jakarta laid mock graves on the street to symbolise the human toll of the pandemic.

Meanwhile, a proposed law that would give police extra powers to curb protests was one of the main subjects of grievance at protests in the UK.

Hundreds gathered in London to protest against the Police, Crime, Sentencing and Courts bill, which activists fear would be used to curb dissent.