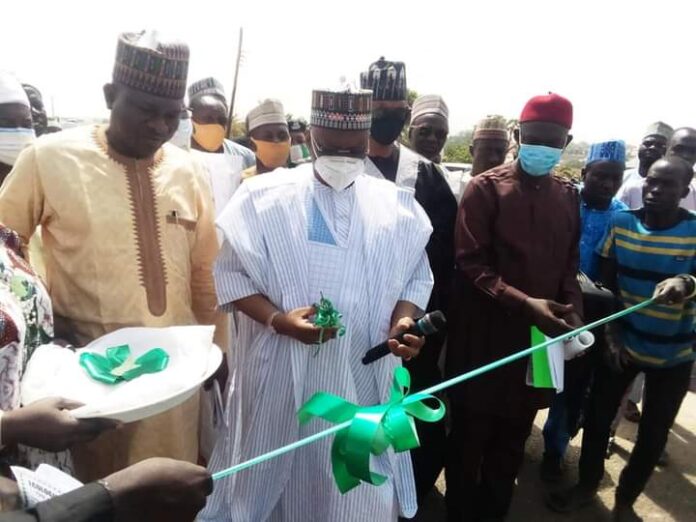 The Minister of State for Foreign Affairs, Ambassador Zubairu Dada on Monday, inaugurated and handed over the Kontagora Erosion and Flood Control Works executed by the Federal Government through the Ecological Fund Office.

Ibrahim Aliyu Special Assistant on Media to the Minister of State in a statement said during the inauguration ceremony in Kontagora, the Minister said the project was one of the 23 intervation projects approved by President Muhammadu Buhari for the second quarter 2018 with a completion period of eight months.

He said the timely completion of the project had underscored the Federal Government’s commitment and sincerity of purpose in addressing the challenges of the people thereby making life more meaningful for them.

Ambassador Dada said the commissioning and handing over of the project would provide an opportunity to the people to take ownership of the project and as well provide security, maintenance and sustainability.

The Minister therefore called on everyone in the community to see the project as theirs, protect and jealously guard it to ensure that it is adequately mainained.

The Governor of Niger State, Alhaji Abubakar Sadiq Sani Bello, represented by the State Commissioner for Environment, Barrister Tanko Zakari commended the Federal Government for the project and stressed the need for both direct and indirect beneficiaries of the project to avoid misuse of the project as dump site.

The Permanent Secretary, Ecological Fund Office, Dr. Habiba Lawal, represented by Engineer Udochie Nwachukwu said the timely completion of the project was as a result of the overwhelming support the contractors received from the government and the host community.

He said the project was initiated through a request by the member representing Kontagora, Mariga, Mashegu and Wushishi Federal Constitutiency at the House of Representatives, Hon Abdullah Idris Garba.

The representatives of the host community who spoke through the Chairman, Kontagora Local Government, Alhaji Shehu S.Pawa and the representative of the Emir of Kontagora, the Bonun Kontagora, Alhaji Haruna Sai’du Namaskar both expressed happiness over the project pledging to protect and guard it.

Highpoint of the exercise was the inauguration and handing over of the project to the Kontagora Local Government Chairman Alhaji Shehu S.Pawa by the Minister of State for Foreign Affairs Ambassador Zubairu Dada.

Adeboye Had No Meeting With Tinubu Over Muslim- Muslim Ticket- RCCG