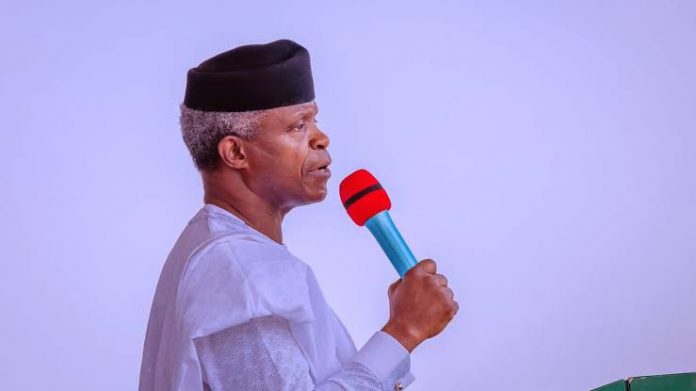 Vice President Yemi Osinbajo on Monday declared his interest in the 2023 presidential election, stirring reactions from Nigerians in different quarters.

In a broadcast on Monday, Osinbajo said that he had visited practically all the local government areas in the country and knows the yearnings of Nigerians.

TheFact Nigeria gathered that the Vice President declared his presidential ambition after wide consultations with stakeholders and with governors of the All Progressives Congress (APC) in a meeting at his official residence in Abuja.

The Vice President’s declaration was also made in a short broadcast shared on his verified Twitter handle.

VP Osinbajo gave a vivid account of his stewardship as the nation’s number two man in the past seven years in a broadcast.

Osinbajo said: “In this period of seven years, I have served the government in several capacities, and have, at the direction of Mr. President, represented our country in sensitive high level international engagements. I have been to practically all local governments in Nigeria.

“I have been in markets, factories, schools, and farms. I have been in agricultural, mining and oil producing communities; in the Delta, in Kebbi, Enugu, Borno; Rivers, Plateau and Ondo; & in all other States of the federation, listening to the diverse experiences and yearnings of our people.

“I have visited our gallant troops in the North East and our brothers and sisters in the IDP camps. I have felt the pain and anguish of victims in violent conflicts, terrorist attacks, flooding, fire and other disasters. I have been in the homes of many ordinary Nigerians in various parts of the country. I have sat with our techprenuers in Lagos Edo, and Kaduna, with our Nollywood and Kannywood actors; with our musicians, from Lagos, Onitsha, and Kano. And I have spoken to small and large businesses.

“I stood where they stood and sat where they sat. I know their hopes, aspirations and fears; and I believe that in those hopes and aspirations are the seeds for the great Nigeria that we all desire.

“I believe that the very reason why the Almighty God gave me these experiences, these insights, and these opportunities is that they must be put to the use of our country and it’s great peoples.

“If by the grace of God and the will of the people, I am given the opportunity, then I believe that first, we must complete what we have started, radically transforming our security and intelligence architecture.”

Meanwhile, the Vice President’s declaration seemed to have not gone down well with Nigerians who stormed the social media with reactions pouring in from different angles.

It was reported that first to declare Osinbajo’s move as out of place was an APC chieftain, Chief Joe Igbokwe who quickly advised the Vice President to rethink his decision before its late.

On one of his verified social mediahandles, Igbokwe advised Osinbajo not to contest against his principal [Asiwaju Bola Tinubu] and he politely cautioned him to tread softly.

He wrote on his FaceBook page: “Let me drop it here for history and posterity: If you are one of the people Asiwaju raised up and you are eyeing the presidency of the federal republic of Nigeria, show respect and withdraw from the race”.

Recall that Osinbajo had served eight years as Attorney-General and Commissioner for Justice in Lagos State when Tinubu was the governor between 1999 and 2007 and was nominated as the running mate to Muhammadu Buhari in December 2014 as the candidate of the APC for the 2015 Presidential election.

Members of the opposition in the House of Representatives Peoples Democratic Party, [PDP] caucus did not spare him either, describing his tenure and that of his principal, President Muhammadu Buhari as a complete failure that took Nigeria backwards.

A statement signed by the caucus leader, Rep Kingsley Chinda demanded to know what Osinbajo wanted after the Nigerian economy collapsed under his watch saying that Osinbajo’s declaration speech was watery and baseless.

The Reps members querried: “First of all, how could he say he is running to “complete the task” that Buhari started?

“Under Buhari, our country’s debt has grown from ₦12 trillion in 2015, to almost ₦50 trillion this year (if the new ₦6 trillion loan requests are granted. If Osinbajo is running to “complete” that, then he is running to completely destroy what is left of Nigeria!

“Osinbajo said he is running to “provide jobs for millions”. Those were his exact words. The fellow has been in charge of Nigeria’s economy for the last seven years, according to Buhari, who boasted that Osinbajo heads his economic management team . Yet, Nigerians have lost jobs created by other administrations.

“His job record is FAILURE! Nigeria has less jobs now, than in 2015, and our unemployment rate has increased from 12% in 2015, to 33% according to the National Bureau of Statistics.

“Osinbajo said he wants to “birth the expectations of greatness” for Nigeria. Under his leadership of Buhari’s economic management team, Nigeria became the world headquarters for extreme poverty. We do not need Osinbajo’s type of ‘expectation’!

“Osinbajo in his declaration speech said he “remained focused on securing the country”. That is an insult to the intelligence of Nigerians. Under Osinbajo and Buhari, Nigeria became the 3rd most insecure nation on Earth.

“Only Iraq and Afghanistan are worse than us. We just witnessed a train bombing and the abduction of over a hundred Nigerians who are still with terrorists. Over 700 of our soldiers have been killed in the last 18 months. If that is what Osinbajo’s focus produces, then we don’t need it!

“For years, Osinbajo has been posing as an intellectual. So, at the very least, we expected his declaration speech to be filled with his achievements in office. But it was instead filled with promises. Empty promises. Because he and Buhari have no achievements to show for their wasted seven years!

“Osinbajo fooled us with his empty promises in 2015. Now, he is making new promises. Fool me once, shame on you. Fool me twice, shame on me. Don’t forget how he was doing Trader Moni during the last elections. Did he not abandon it after he and Buhari rigged themselves to a second term”.