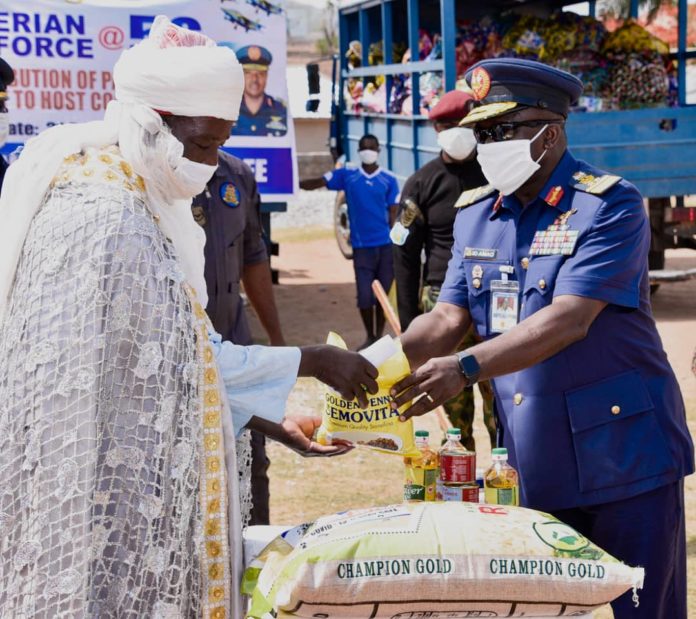 As part of activities to mark its 56th Anniversary, the Nigerian Air Force (NAF) yesterday, April 21, 2020, distributed food items and other palliatives to indigent members of its host communities in Nuwalege, Zamani and Ushafa in the Abuja Municipal and Bwari Area Councils of the Federal Capital Territory (FCT).

The palliatives, which were handed over by the Chief of the Air Staff (CAS), Air Marshal Sadique Abubakar, represented by the Chief of Policy and Plans, Air Vice Marshal (AVM) Oladayo Amao, are aimed at complementing the efforts of the Federal Government in assuaging the hardships being experienced by Nigerians due to the lockdown imposed to curb the spread of the novel Coronavirus (COVID-19).

Unlike previous NAF Day Celebrations, this year’s anniversary has been scaled down in keeping with the mood of the Nation as well as the need to comply with the stipulated precautionary measures to curb the spread of the virus.

The Director of Public Relations and Information, Air Commodore Ibikunle Daramola in a statement said, the distribution of palliatives to NAF host communities, which commenced yesterday would also be replicated in all the 6 Geopolitical Zones of the Country and would last until 26 April 2020.

Meanwhile, the Representative of the CAS, AVM Amao, stated that the NAF Day was usually marked with a lot of fanfare and major activities such as ceremonial parades, anniversary lectures, medical outreaches, gala nights and award ceremonies as well as static and aerial displays, amongst others.

However, he disclosed: “with the mood of the Nation as a result of the COVID-19 global pandemic, the NAF decided this year to mark the anniversary in a low key manner whilst reaching out to poor and vulnerable members of our host communities through the distribution palliatives”.

He added that members of the Nigerian Air Force Officers’ Wives Association (NAFOWA) would also be complementing the effort of the NAF through the distribution of palliatives to some communities before the end of the week.

He appealed to beneficiaries to stay safe and observe all the precautionary safety measures and guidelines stipulated by the Federal Ministry of Health, Nigeria Centre for Disease Control (NCDC) and other relevant Government Agencies, as the NAF would continue to visit them from time to time to further enlighten them on steps they could take individually and collectively to stem the Pandemic.

Earlier in his welcome remarks, the Commander 053 Headquarters NAF Camp, Abuja, Air Commodore Simon Peter, noted that in view of the recent turn of events brought about by the COVID-19 Pandemic, the CAS directed that the NAF’s 56th Anniversary should be flagged off with the distribution of palliatives to the poor and vulnerable groups in the NAF’s host communities nationwide.

He disclosed that about 500 families would benefit from the first phase of the programme in Abuja and would receive various relief items including bags of rice and semovita as well as vegetable oil, tin tomatoes and hand sanitisers.

While thanking the CAS for the laudable initiative, the Commander recalled how the NAF, as part of its civil military relations efforts, had held medical outreaches and provided toilets and a borehole for the Primary School in the Community.

He noted that the Service would continue to add value to the society and thus contribute to Nation building.

The Sarki Nuwalege, Bashiru Daudu, while appreciating the NAF for coming to their aid at this crucial period, noted that the palliatives distributed by the Service would reduce hunger and also mitigate the hardship the people of the Community were facing. He also thanked the CAS for the laudable initiative which, he said, would further assist the poorest of the poor in his Community.

The other activity lined up to commemorate the NAF Day 2020 is a Fly-past by NAF aircraft on Wednesday, 22 April 2020, which would serve as a salute to the Nigerian people for their support to the NAF over the years, whilst also reminding Nigerians to stay safe in these trying times.

The flag-off ceremony of palliatives in Abuja was also witnessed by Branch Chiefs, Directors and other senior officers from Headquarters NAF and other units in Abuja as well as members of the host communities.

We Recorded Increased Uptake In Routine Immunisation Despite Covid-19 -NPHCDA