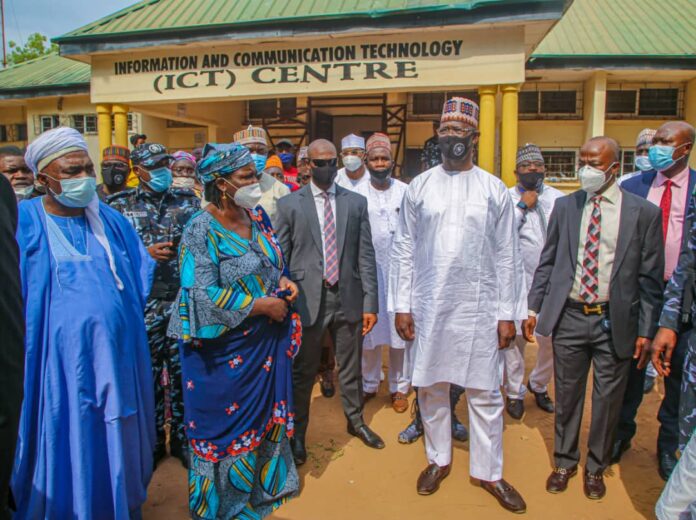 Gov. Sule (middle) at the Polytechnic in Nasarawa State

Nasarawa State Governor, Engineer Abdullahi Sule, has directed the Rector of the Isa Mustapha Agwai Polytechnic (IMAP), Lafia, Dr. Justina Anjide Kotso, to wield the big stick on anyone involved in the recent students’ unrest, which led to the destruction of property at the institution.

Engineer Sule handed down the directive shortly after inspecting the level of destruction at the polytechnic, on Friday.

TheFact Nigeria reports that a visibly angry Governor Sule warned that his administration will not condone any act capable of taking the state backward, considering all the efforts by government to turn around the education sector.

Engineer Sule told the rector that she must fish out all those involved in the protest, and to sanction them irrespective of their social status.

Recall that students of the state-owned polytechnic undertook a violent protest on Thursday, leading to the vandalization of the ICT centre, all the bore holes in the school, academic office, as well as the central administrative block, among others.

The Nasarawa Governor said his administration will not take the situation lightly, since education remains a cardinal objective of the government, especially technical education, which has the potential to impact skills on youths in the state towards self-reliance.

“It’s unfortunate that we are having this problem at a time we are supporting education. It has taken us some steps backward. But we are determined not to allow any body to take us back. We will continue to do our best,” he stated.

While describing the actions of the students as unnecessary and uncalled for, Engineer Sule called on the Students’ Union Government at the institution, to assist the school authority, by fishing out those suspected to have masterminded the protest.

“We are all students at one point or the other, if we had destroyed all the institutions, which institutions will some of you attend? Whoever has done this, does not mean well for the students, as well as Nasarawa State,” the Governor said.

Engineer Sule further described the actions of the students as unfortunate, especially at a time when his administration is working tirelessly to change the narrative regarding the educational backwardness of the state.

The Governor equally warned fraudulent staff of the institution, who may have masterminded the destruction of the ICT centre, in their selfish bid to sustain the use of fake receipts, stressing that his administration will not condone such acts.

Engineer Sule then directed that the institution remain closed for not more than one week, pending the outcome of ongoing investigations, as well as giving the authority at the institution to restore water supply back for use of students.

“My own children have finished school, they are not going to school here. It’s not about me. It’s about the poor person who cannot afford to send his child anywhere else but this school. And they are destroying the future of that children,” he added.

Earlier, the state Commissioner of Police, Mr. Bola Longe, disclosed that so far, 27 students have been arrested in connection with the protest, assuring that only those found to have actively engaged in the violent protest, will be sanctioned.

The Governor was shown round the school by the Rector of the institution, Dr. Justina Anjide Kotso, in company of the members of the Governing Council of the polytechnic, led by its Chairman, Dr. Sani Mohammed-Bako, among others.