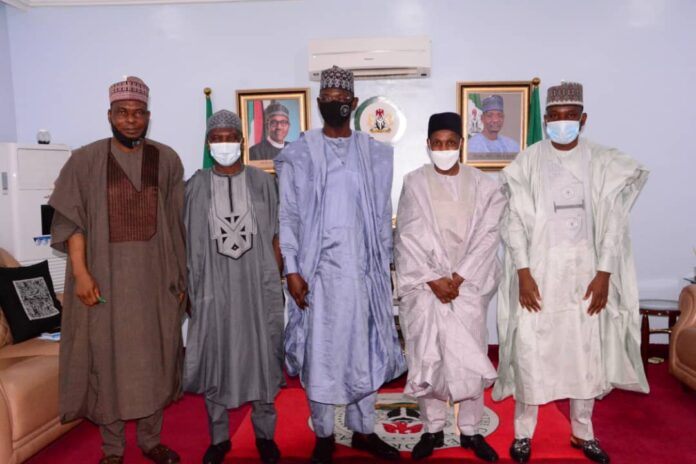 Nasarawa State Governor, Engineer Abdullahi Sule, has sought for the partnership and collaboration of the Media Trust Limited, publishers of Daily Trust newspaper, towards achieving the economic diversification thrust of the country, particularly the Northern region.

Engineer Sule made his case while playing host to the management of the Daily Trust newspaper, led by its Acting Chief Executive Officer (CEO), Malam Nura Daura, on a courtesy at the Government House, on Wednesday.

The Governor equally sought the partnership of the flagship northern newspaper, towards addressing the negative indices associated with education in the region.

According to the Governor, there is every need to diversify the economy of Nigeria, particularly that of the North because the country’s reliance on oil and gas is but for a matter of time.

“The future of Nigeria may not necessarily be in the oil and gas sector. I am an oil and gas person. I am an engineer who worked most of my career in the US oil and gas and I know that for Nigeria to continue to rely on oil and gas, is only a matter of time. It will come to an end,” Engineer Sule stated.

Engineer Sule reemphasized that the future of Nigeria and the North, is going to be in minerals and agriculture.

The Governor said therefore there is the need to collaborate with the Daily Trust towards achieving economic diversification of the North, especially that there is no state in the region that does not have one form of solid minerals or the other.

On the fallen standards of education of the North, Engineer Sule said he was always baffled when attending either the National Economic Council (NEC) or the Nigerian Governor’s Forum (NGF), for the North to always come bottom of every indices or parameters in education, with the Southern states always top.

“Every time we sit there among the governors, whether at NEC or NGF to discuss about education, you will see that the first five or seven states, none will be from the North. You will see that last seven, eight states will be all northern states. And every time I sit there, it affects me emotionally,” he said.

While noting that he is a member of two important committees of the Northern Governors Forum (NGF) namely Committee on Economic Diversification of the North and that of Reviving the Economy of the region, Engineer Sule urged the Daily Trust to partner with the NGF, towards achieving these and many other laudable goals.

The Governor assured the newspaper that his administration will continue to build on the already existing relationship between Nasarawa State and the Daily Trust.

Engineer Sule commended the progress made by the paper, lauding the decision of the owner-managers of the Daily Trust to step aside and to allow core professionals manage the affairs of the newspaper.

“I commend their courage, in withdrawing to the side line and allowing professionals to take over and manage it. I think that is what transition is all about, that’s what vision is all about,” he said.

The Governor particularly commended Media Trust Limited for seeking to reawaken the reading culture in children, recently threatened by the social media, through the publication of the Teen Trust, a newspaper targeted at children.

Earlier, Acting CEO of the Daily Trust, Malam Nura Daura, said they were at the Government House to build on the already existing relationship between the Nasarawa State government and the newspaper.

While commending the Governor for his development initiatives, Malam Daura said, coming from the organized private sector, Engineer Sule is bound to leave lots of legacies by the time he leaves office.

“Our ears are open and we will receive it from you, someone who has capacity to inform us,” he said.

The Daily Trust management sought further collaborations with the state government, particularly in patronizing its Teen Trust, a subscription based newspaper for children, aimed at inculcating reading culture in children.

The Daily Trust Acting CEO was accompanied on the visit by the Editor-in-chief of the newspaper, Naziru Mikailu, as well as the General Manager, Business Development, Mallam Ibrahim Shekarau.