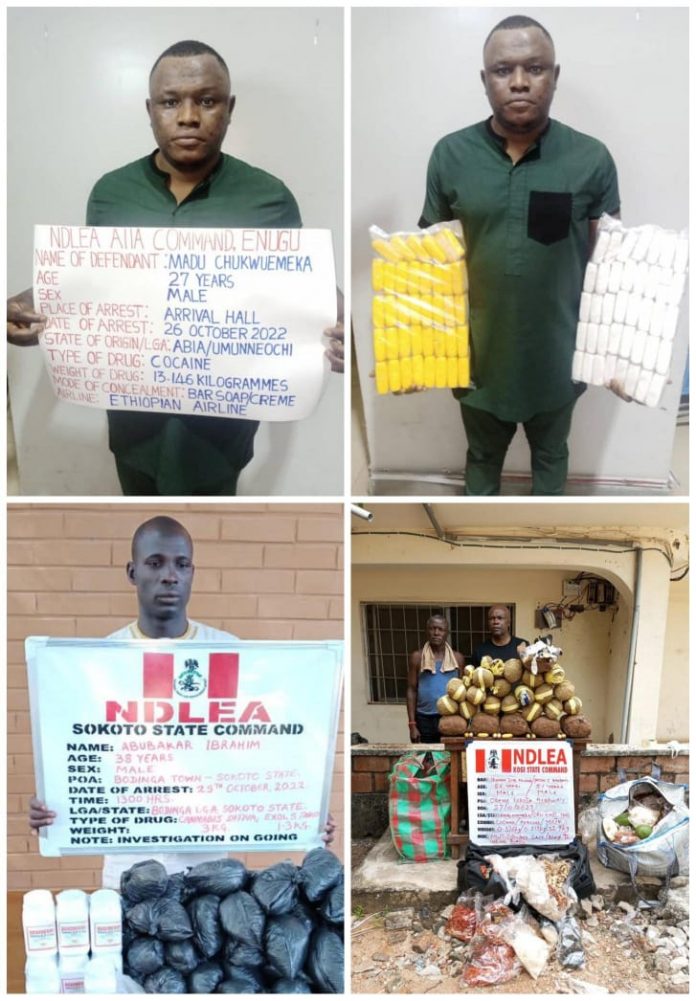 The anti-narcotics agency’s Director of Media and Advocacy, Mr. Femi Babafemi, disclosed this in a statement on Sunday, 30 October, 2022.

TheFact Daily reports that in the operations carried out across seven States, Nine Hundred and Ninety One Thousand Three Hundred and Twenty (991,320) pills of pharmaceutical opioids and 1,251kgs of cannabis and khat, as well as 46.637 kilograms of methamphetamine, cocaine and heroin were recovered by the NDLEA operatives.

Abubakar Ibrahim, 38, was arrested in Bodinga town on Tuesday, 25th October, with 3kgs of cannabis sativa and 4,000 tablets of exol-5.

In another development, NDLEA operatives attached to the SAHCO import shed of the Murtala Muhammed International Airport, MMIA, Ikeja Lagos, on Wednesday 26th October, intercepted 10 cartons of Tramadol 225mg imported from Dubai, United Arab Emirates, while four cartons of 100mg and one carton of 225mg Tramadol came in from Karachi, Pakistan on another Ethiopian Airlines flight. Put together, a total of 15 cartons containing 802,000 pills of Tramadol were intercepted.

On the same day, operatives at the SAHCO export shed intercepted cans of tomato paste going to the United Kingdom. A thorough search of the consignment revealed that the tomato cans were used to conceal 36 pellets of cannabis with a gross weight of 21.30 kilograms while a cargo agent, Sodehinde Akinwale has been arrested in connection with the seizure.

On Friday 28th October, operatives attached to the NAHCO import shed of the Lagos airport seized five cartons of dried khat leaves, weighing 107.70kg that came in from Bangkok, Thailand through Dubai on an Emirates Airline flight.

Meanwhile, a follow up operation on the seizure of 11.90kg of meth concealed in the heads of dried fish going to Dubai, UAE on 5th August, 2022, has led to the arrest of a 30-year-old bricklayer, Babatunde Quadri Mamowora on Thursday 27th October, in Sango Ota area of Ogun state in collaboration with men of the Nigerian Security and Civil Defense Corps, NSCDC, in the area.

In the same vein, a 27-year-old Madu Chukwuemeka Miracle has been arrested by operatives at the Akanu Ibiam International Airport, AIIA, Enugu on arrival from Nairobi, Kenya, via Addis Ababa, Ethiopia, on Wednesday 26th October.

A search of his three bags revealed seventy-six (76) foreign bathing soaps made with cocaine in one of the bags while another had two plastic bottles containing a creamy liquid which tested positive to cocaine. The cocaine bars weighed 10.650 kilograms while the liquid cocaine weighed 2.496 kilograms, a total of 13.146 kilograms.

In Kogi State, NDLEA operatives on a stop-and-search operation along Okene-Abuja highway on Thursday 27th October, intercepted a Chisco Transport branded bus coming from Lagos to Abuja with a consignment of 32.9kg of meth packaged as tubers of yam; 376 grams of cocaine and 215 grams of heroin. While the bus driver, Chief Pascal Chigozie Nmaram was promptly arrested, a follow up operation in Abuja on the same day led to the arrest of the recipient of the illicit cargo, identified as Ikenna Jude Akunne, who confessed he was detailed to travel with the consignment to Spain the following day, through the Nnamdi Azikiwe International Airport, NAIA, Abuja.

In the same vein, operatives of the Statet Command of the Agency have destroyed five hectares of cannabis farms at Agbonkete, Iyaya Camp, Igalamela/Odolu LGA, where a suspect, Augustine Agbenyo, 34, was arrested with three sacks of both fresh and dried leaves and stems of the illicit substance.

Furthermore, in the FCT, operatives on patrol along Kwali-Abuja highway on Monday 24th October, intercepted a truck with 915.8kg of cannabis and arrested three suspects: Kabiru Ibrahim, 40; Muhammad Muawiyya, 30, and Adamu Adamu, 24.

In Adamawa State, operatives arrested two trans-border traffickers, Abdullahi Mamuda (aka Mama) and Aliyu Abdullahi (aka Garga) at Skylight Hotel in Jambutu, Yola North. A search of their vehicle, an ash coloured Toyota Corolla car with registration number JMT 146 TE (Adamawa), revealed 39, 320 tablets of Tramadol 225mg concealed in different compartments of the doors of the car.

Preliminary investigation shows the trans-border traffickers took off from Onitsha in Anambra State and travelled to Jimeta, Adamawa State where they lodged in the hotel before heading to Belel, a town along the Nigerian-Cameroon border where they would repackage the drugs as ordinary consumables and ferry across the river to Garoa in Cameroon.

Reacting to the strings of arrests and seizures in the past week across the various States as well as the MMIA and AIIA Commands of the Agency, Chairman/Chief Executive of NDLEA, Brig. Gen. Mohamed Buba Marwa (Retd), commended the officers and men of the various Commands for their unrelenting commitment to the presidential mandate to clear Nigerian forests and communities of illicit drugs in whatever form.

He charged them to remain steadfast and upright at all times.

Killings At Lekki Toll Gate Not Verified- US Report