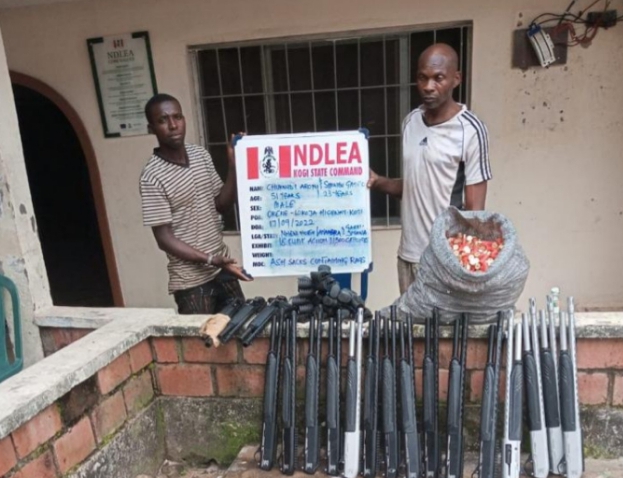 Operatives of the National Drug Law Enforcement Agency (NDLEA), have intercepted a vehicle with 18 Pump Action rifles and 1,300 cartridges in Lagos State.

The anti-narcotics agency’s spokesperson, Mr. Femi Babafemi disclosed this in a statement on Sunday, 18 September, 2022.

According to Babafemi the operatives were on patrol along Okene-Abuja highway, on Saturday, September 17, 2022, when they intercepted a J-5 bus with the weapons. The vehicle was said to have been coming from Onitsha, Anambra State enroute Kaduna-Zaria in Kaduna State.

“Another suspect, Anthony Agada, 37, conveying 1,000 cartridges, was equally nabbed in a bus coming from Onitsha to Abuja same day.”

Meanwhile, in another operation by NDLEA operatives, 1,404 bottles of codeine syrup and 2,040 ampoules of pentazocine injection were seized from a vehicle coming from Onitsha enroute Sokoto, with the receiver, Stanley Raymond, 39, and the sender, Shadrack Ifediora, 46, arrested in follow-up operations in Sokoto and Anambra States respectively.