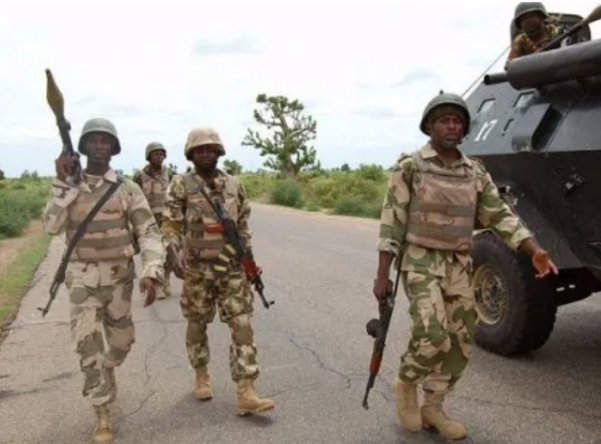 Military troops of the counter-insurgency operation in the North East have killed 43 Boko-Haram and Islamic State in West Africa Province (ISWAP) terrorists in the volatile areas in the month of August.

Musa, who further revealed that the troops had also conducted a total of 2,726 patrols and 982 ambushes against the insurgents within the month, said that those operations came on the heels of the orders of the Chief of Army Staff, Lt Gen Faruk Yahaya, to turn up the heat on terrorists, and end insecurity in the northeast.

“I can tell you we are putting a lot of pressure on the terrorists because the Chief of Army Staff has directed us to clear the criminals. A lot of operations are going on; our Operation Desert Sanity and Lake Sanity are on course and getting on well. Our air component is conducting airstrikes”, the Theatre Commander said.

He averred that the pressure on the terrorists have led to massive surrendering of the insurgents and terrorists, adding that the three sectors in the theatre recovered some arms from the terrorists during operations, while the combatants who surrendered also gave their arms.

Gen. Musa said, the Borno state government was collaborating with the military to provide additional holding facilities for the surrendered Boko Haram/ISWAP members.

He urged Nigerians not to entertain any fear of the surrendering of Boko Haram members, adding that the Federal Government was putting together a de-radicalisation programme to handle the surrendered Boko Haram/ISWAP members.

Among the large cache recovered or seized by the theatre since January, according to the Theatre Intelligence Coordinator, Colonel Obinna Azuikpe, include 129 AK 47 rifles, 16 FN rifles and 3 machine guns. Others are 17 grenades, two pistols, two Rocket Propelled Grenades (RPGs), 1 mortar, 145 magazines, 1, 515 rounds of ammunition, 92 mobile phones and 3 hand held radios.

eNaira: No Plans To Withdraw Naira Notes From Circulation -CBN