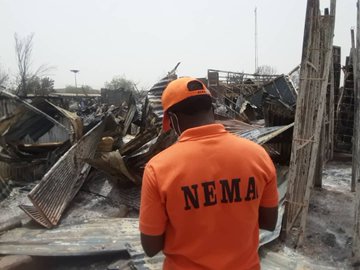 The assessments were done by the zonal offices following a directive to that effect by the Director General of NEMA, AVM M.A Muhammed (rtd).

This information was obtained on Friday evening from the official Twitter handle NEMA, @nemanigeria.

“The assessment of damages at the Katsina Central Market was carried out by NEMA Staff from the North West Zonal office Kaduna led by the Coordinator Mallam Abbani Imam Garki in collaboration with the Katsina SEMA, security agencies and the market traders officials.

“The HM @Sadiya_farouq of @FMHDSD has also activated NEMA to render necessary supports to the affected persons.”

Recall that more than 100 shops were razed by the fire incident which occurred at the Katsina Central Market with several shops and wares worth millions of Naira burnt.

In a similar incident in Gusau, Zamfara State, properties worth millions of Naira and over 60 shops were reported destroyed in a midnight fire outbreak at the Tudun-Wada Market.