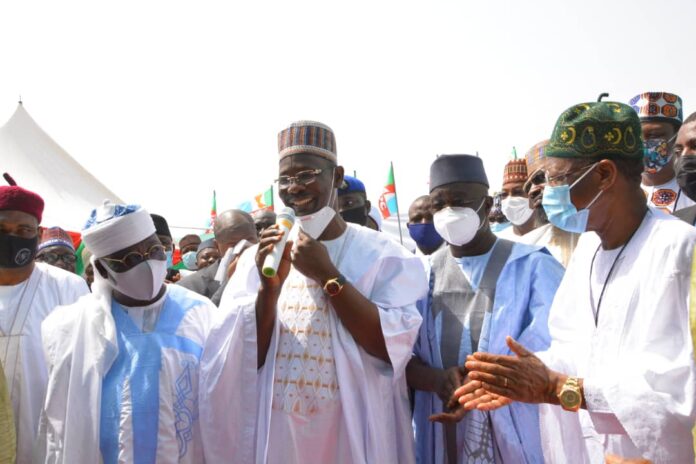 Nasarawa State Governor, Engineer Abdullahi Sule has restated the commitment of his administration to build on the foundation laid by his immediate past predecessor, Senator Umaru Tanko Al-makura.

Engineer Sule made this known during the official commissioning of the remodelled state secretariat of the ruling All Progressives Congress (APC), in Lafia, on Friday.

While using the opportunity of the event to once more thank Sen. Al-makura, known as the Architect of Modern Nasarawa State, the Governor pointed out that without the foundation earlier put in place by his predecessor, there will be nothing to build upon.

“As we said earlier, he is the Architect, who is supposed only to design but in addition to designing, he also set a foundation. And our work is to ensure that we continue to build on that foundation,” Engineer Sule stated.

The Governor appreciated the state officials of the APC, for their efforts in keeping the APC floating and for making the ruling APC the party to beat not only in Nasarawa State but in Nigeria.

Engineer Sule equally commended them for the peaceful conduct of the revalidation and registration exercise across the state.

The Governor also used the opportunity to clear the air regarding the source of funds used in remodelling the party secretariat, stressing that he used his personal funds and not government resources to give the secretariat a facelift, through direct labour.

Engineer Sule thanked the Minister of Information and Culture, Alhaji Lai Mohammed, who though on a different mission in the state, took time to grace the occasion.

Earlier, State Interim Chairman of the APC, Hon. John Mamman, thanked the Governor for undertaking to remodel and restructure the state secretariat to a befitting status.

Hon. Mamman equally appreciated national and state assembly members, as well as critical stakeholders of the party, for being supportive of both the party and the state government under the leadership of Engineer Sule.