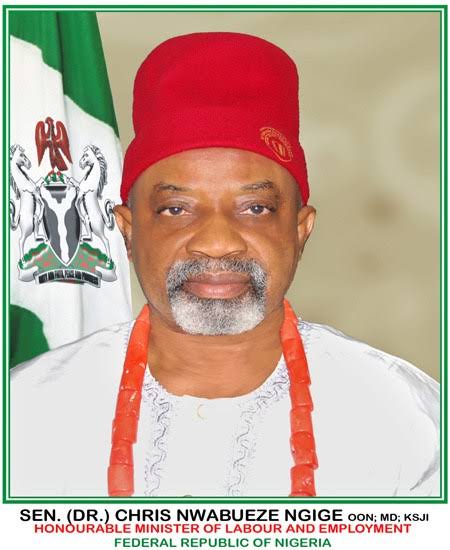 The Minister tendered an apology on Tuesday in an address delivered when he led a delegation from the Ministry on a visit to the Senate President, Ahmad Lawan, at the National Assembly, Abuja.

Ngige said: “Having visited your domain to the Joint Committee on Labour, Productivity and Employment over some issues of the Special Public Works Programme of the Federal Government, a Programme that was designed by the Executive with the legislature, if the Executive makes a proposal and it is not funded, then that proposal will be dead on the table.

“We deeply regret the incident that happened, the altercation that followed it, between my Minister of State and members of the Joint Committee.

“Therefore, we decided that as a team, we would come with full force and give the necessary information that we need so that we can fast track this Programme which was designed from the office of the President before the COVID-19.

“We must work hand-in-hand without acrimony or even drawing a very rigid line of who has this power and who doesn’t. That is the only way the programmes of government can be made sustainable and executed for the benefit of our people.

“In the Seventh Senate, the National Assembly didn’t have a rancorous relationship with the Executive of Dr. Ebele Jonathan, even though some of us were in the opposition parties.

“We came to the Eighth National Assembly, we had a very terrible experience for the legislature and executive, because when you go into such wars, wars are fought with bullets and you do not know who these bullets will touch.

“Many people became casualties to the extent that even the head of the legislature at the time had to be taken to the Code of Conduct for criminal charges and trial.

“Today, in the Ninth Senate, we are enjoying a robust relationship with the legislature. Some of us who have passed through this institution, will do everything possible to maintain that relationship.

“Therefore, Mr. President, I apologize on behalf of my Ministry for what took place the last time, and I hope this apology will be taken by members of the Committee and the entire National Assembly, because I’m aware and I know that a Committee is a representative of the whole. The committee room is an extension of our hallowed chambers.

“I, therefore, request that we forgive and forget. Let us turn a new page and start off on this Programme which the National Assembly has indicated that they’ve suspended. We can’t suspend forever programmes that affect our people.

“This is an intervention Programme by which the government wants to put in N52 billion into the economy. In fact, those who are impoverished by the lockdown of the pandemic can get some relief.”

The Senate President in his response explained that the decision by the National Assembly to approve the sum of N52 billion as requested by the Executive for the Special Public Works Programme was mainly out of confidence in the National Directorate of Employment (NDE) to implement accordingly.

He stated that the Ministry of Labour, Productivity and Employment only has a supervisory role to play in the implementation of the Programme designed to recruit 774,000 Nigerians.

“When Mr. President presented the request for the appropriation of N52 billion for Public Works, the National Assembly Committees scrutinized and recommended to the plenary of the two chambers the same request without any change, while recommending the passage.

“The National Assembly passed that request feeling convinced that this is one Programme that is needed in this country especially at this time.

“But we were also conscious of one thing, who should implement the programme? That was one of our considerations. Even the Executive requested that the National Directorate for Employment (NDE) should implement the Programme, and we agreed with that for the following reasons.

“NDE has been in existence since 1996, and is established by law, and that was our reason for keeping the money in NDE to implement as an agency.

“NDE has six zonal offices and thirty seven state offices, including the FCT, and close to 700 local government representative officers across the country.

“They have a staff strength of over 2,200, and therefore, NDE is primed to undertake such a project because it has the capacity. The Ministry of Labour at the headquarters has no such capacity.”

According to Lawan, the Ministry’s involvement in the implementation of the programme runs contrary to the provisions of the law which only empowers NDE to make procurements.

“Ours (National Assembly) by design of constitutional arrangement is to ensure that we do oversight on this programme.

“There’s no way we can pass N52 billion and then not take interest in how this money will be paid. In fact, only NDE can undertake the procurement process, you can’t in the Ministry. How can you even contemplate taking the implementation?”

The Special Assistant, Press,
to President of the Senate Ezrel Tabiowo in a statement quoted the Senate President to have described as null and void all earlier actions taken by the Ministry of Labour, Productivity and Employment to commence implementation of the Special Public Works Programme.

“Our committees were right to request for the explanation of the modalities. We stand by our committees, and in total support of the suspension of the Programme. In fact, any action taken before now is null and void. You are going to start all over.

“You said there’s need for a fresh start. When you go for your meeting with the committee, once you engage then NDE starts to put the structure on how the 20-man selection committee will be realized, how the one thousand people in every local government will be selected or identified, how the Programme will be judged successful or fail.

“I want to assure you Honourable Minister that we are going to support you all the way to make sure this Programme is successful, but you don’t have our support of the Ministry ventures into it.

“We will continue to insist that the Ministry should have no role more than supervision of this Programme. And if the Ministry goes ahead, that means it will be breaking the law because the budget is a law”, Lawan said.

Why MPC Voted To Retain Interest Rate At 11.5% -Emefiele

The Executive Chairman of the Economic and Financial Crimes Commission, EFCC, Abdulrasheed Bawa has stressed the need for all Nigerians to embrace the fight...

Chief of the Naval Staff, CNS, Vice Admiral Awwal Gambo has reiterated that there would be zero tolerance for wastages in the Navy under...

Nasarawa State government said it's strategizing towards introducing key reforms in land administration, in a bid to remove bottlenecks in the ease of doing...

Vice President Yemi Osinbajo on Monday briefed President Muhammadu Buhari on his activities and decisions reached on his behalf while the President was away...

With its landslide victory at the local government polls in Rivers State, the Peoples Democratic Party, (PDP) has said that the ruling All Progressives...